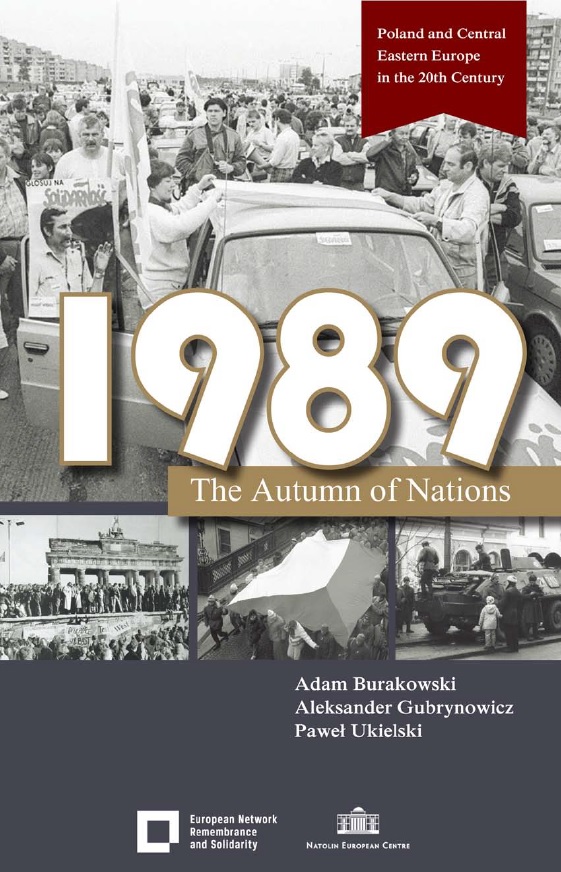 When in 1989 the communist system tumbled, the whole world was astounded. Since the onset of the Round Table talks in Poland in February until the execution of Elena and Nicolae Ceauşescu in December, Central and Eastern Europe underwent a tempestuous yet relatively non-bloody process of breaking free from the communist regime. Today, thirty years down the road, the perspective seems distant enough to attempt comparative studies without being too emotional.

The title of book: 1989 – The Autumn of Nations most fittingly defines its subject matter. The main events discussed and analysed by the authors took place in the autumn of 1989 and they are the focus of the work. The book attempts to demonstrate the transformations that led to the collapse of the totalitarian system in the region.

The entire analysis is not confined to the second half of 1989. Narrowing the scope so much would prevent the explanation of both the mechanisms and root causes of the transformations. Neither would it help to study their effects and the presence of the remnants of communism today.

On the one hand, many people still recall the events of that time. On the other hand, the young generation who has entered adulthood has always enjoyed freedom in their lives. 30 years from regaining freedom is a perfect distance for analysing both the events leading up to it (the last years of communism and its collapse) and the summing up of the post-communist period.

Although more than quarter of century has already passed since the fall of communism, the Autumn of Nations continues to fascinate both professionals working in the field as well as ordinary readers. In those years, countless publications, document collections, memoirs from those directly involved and even creative writing on the subject have been published – all trying to shed more and more light on the mood of that historic period.

In this case, one of the basic aims of this publication is to once again relate the events of the Autumn of Nations, in line with what is known on the subject today, which following further releases of new piles of documents and publications has been notably expanded. Only in the light of such clarifications will it be possible to once again pose questions about which factors were key in the process of erosion and then the fall of communism, and to then consider whether these events did indeed have a revolutionary character or were more a series of deep reforms, introduced on conditions set by the main players on the political scene of the time.

Therefore, the reflections on each of the countries under scrutiny are divided into three principal sections, i.e. the last years of communism, the direct process of the collapse of the regime and the ramifications of the above process 30 years later.

This study, attempting to provide a synthesis of the subject, make a comparative analysis of six (now seven, after the division of Czechoslovakia) countries which took part in the Autumn of Nations in 1989 that changed their regimes in 1989: Bulgaria, Czechoslovakia, the German Democratic Republic (the GDR), Hungary, Poland, and Romania.

The removal of the remnants of the system forcibly imposed on the nations of Central Europe was not limited to the profound transformation of the system in 1989 or even in the following two or three years. The rejection of the communist legacy in all the countries of the region took much longer; in some areas, the process has not been completed to date. The authors took into account all of the above circumstances when building the contents of the book.

The publishers would like to thanks the following institutions for their involvement and financial support which allowed us to publish this book: Polish Institute in New Delhi (2016), Institute of Political Studies of the Polish Academy of Sciences (2017), Ministry of Human Resources of Hungary (2015).

The publication was issued in the framework of the project The Electronic Platform for the Transfer of Knowledge and Source Materials: Visions of Poland’s Role in Central and Eastern Europe in Geo-Political, Economic, Civilisation and Cultural Concepts in the 20th Century, funded under the "DIALOG" programme of the Polish Minister of Science and Higher Education and implemented in the years 2018–2020.

We would also like to inform that in addition to the EPUB and MOBI formats, a pdf version of the publication will be available by the end of December 2020.

The publication is available in English.

Adam Burakowski, Ph.D. – Sc.D. in political sciences and Associate Professor of the Institute of Political Studies of the Polish Academy of Sciences. Graduate of History (2001) and Eastern Studies (2004) at the University of Warsaw, afterwards he joined the Institute of Political Studies of the Polish Academy of Sciences in 2004. He is an author of many books concerning India and Central Europe, especially Romania, among many others: Karpacki geniusz. Dyktatura Nicolae Ceaușescu 1965–1989 [Carpathian Genius. Dictatorship of Nicolae Ceaușescu 1965–1989] (published twice in Romania – 2011 and 2016) and Indie. Od kolonii do supermocarstwa 1857–2013 [India. From Colony to Superpower 1857–2013] (with Krzysztof Iwanek). In 2006–2017 he worked in Polskie Radio, Polish national radio broadcaster, holding various positions related to the international affairs. He was a Polish representative to the European Broadcasting Union (EBU), where he was the Coordinator of the Central Eastern European Group. Simultaneously he was involved in the Euranet – pan-European radio project financed by the European Commission, established in 2007. Since December 2017 he is Ambassador of Poland to India, Afghanistan, Bangladesh, Bhutan, Maldives, Nepal and Sri Lanka.

Aleksander Gubrynowicz – assistant professor at the Faculty of Law and Administration, University of Warsaw. He graduated from this Faculty (1998), submitted his Ph.D. thesis (2001), and obtained Sc.D. (habilitation) in 2016. He is an expert in international law (specialist in international environmental law and international investment law) and the history of legal taught. As an expert in international relations, he worked over many years in the Institute of Political Science. In 2003–2004, he served as the Deputy Chair of International Relations at the Collegium Civitas. He wrote many articles on the history and recent policy of Lithuania, Latvia, and Estonia. He analyzed demographic issues of Germany and retributive policy in Hungary after WWII. At the same time, he coordinated the Jean Monnet Project concerning the global economic law’s fundamental challenges. Since 2001, he has been working at the Faculty of Law and Administration at the University of Warsaw.

Paweł Ukielski, Ph.D. – a political scientist, historian, the Deputy Director of the Warsaw Rising Museum (2004–2014 and since 2016). An associate professor in the Department of Central and Eastern Europe of the Institute of Political Studies at the Polish Academy of Sciences, a lecturer of Collegium Civitas. He was the vice-president of the Institute of National Remembrance in 2014–2016 and a member of the Executive Board of the Platform of European Memory and Conscience in 2011–2017. Since 2019, he has been the chairman of its Supervisory Board. His research interests encompass contemporary changes in Central Europe after 1989, Central European regional co-operation, the division of Czechoslovakia, Czech-Slovak relations and historical policy. The author of the monograph Aksamitny rozwód. Rola elit politycznych w procesie podziału Czechosłowacji [The Velvet Divorce. The Role of Political Elites in the Czechoslovakia Division Process] (2007), the author of the collection of texts: Pamięć Polski, pamięć sąsiadów. Pamięć Europy [Memory of Poland, Memory of Neighbors. Memory of Europe] (2020), co-author of books: 1989 – Jesień Narodów [1989 – The Autumn of Nations] (2009, Romanian issue 2013, Hungarian issue 2014) and Inicjatywa Trójmorza z perspektywy jej uczestników [The Three Seas Initiative from the Perspective of its Participants] (2020). His articles have been published in many scientific periodicals in Poland and Europe. He was distinguished, among others, with the Gold Cross of Merit of the Republic of Poland and the Knight’s Cross of the Hungarian Order of Merit.