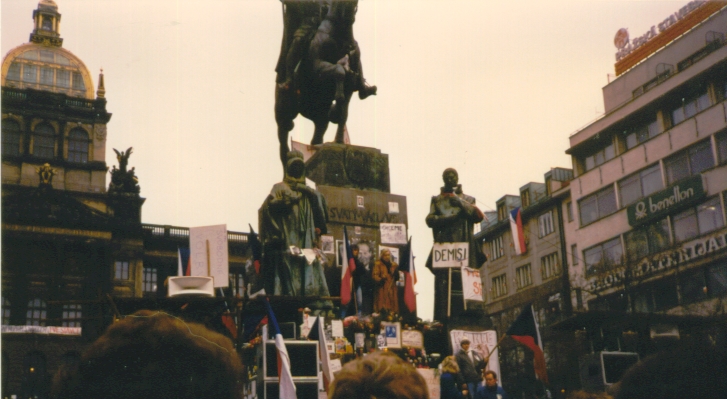 On 17 November 1939, the Germans targeted Czech students in response to anti-Nazi demonstrations which were held in Prague. The turbulent events not only inspired the creation of International Students’ Day, but are also inextricably linked to the beginning of the Velvet Revolution 50 years later.

The German occupation of Czechoslovakia started even before the beginning of the Second World War. As a result of the Munich Agreement – a failed attempt by Great Britain, France and Italy at appeasing expansionist intentions of Adolf Hitler and Nazi authorities – the northern, southern, and western parts of the country, known as Sudetenland, were ceased to Third Reich in autumn 1938. Few months later, on 15 March 1939 Hitler’s army invaded the rest of Czechoslovakia and established the Protectorate of Bohemia and Moravia which, while nominally autonomous, was under Third Reich’s control1. The move followed the creation of the First Slovak Republic, a client state of Nazi Germany, founded one day before in the Slovak part of Czechoslovakia.

During the first months of the Protectorate, the Czech public turned to passive resistance. Small acts expressing discontent over the loss of independence were observed. Many chose cultural venues to express their patriotic feelings. Performances of national compositions such as Bedřich Smetana’s “Má vlast” (in English: My fatherland)2 inspired spontaneous singing of the national anthem3. The increasing displays of national sentiments eventually drew the ire of Nazi officials who soon prohibited singing patriotic songs in public space.

Regardless of official bans new acts of resistance occurred. One of them took place at the first anniversary of the Munich Agreement on 30 September 1939 when boycott of all public transportation in Prague was organized. Everyone except the uninformed Germans went on foot for the entire day4. According to historian Mary Heimann, this grass-root social initiative was accompanied by flurry of leaflets and handbills suggesting more ways to protest peacefully against the German rule. Some flyers also encouraged to take part in a mass demonstration in Wenceslas Square that was to be held on the most emotive date in the political calendar, Czechoslovak Independence Day on 28 October5.

The evening before the demonstration the most popular sites of significance to the Czechoslovak history such as graves and monuments were decorated with flowers. Despite diplomat Jan Masaryk's6 pleas in BBC radio broadcast to "the nation" that no risks shall be taken, hundreds of Prague citizens turned out in the Square for peaceful protest. As demonstration was growing in size, protesters became bolder and started to express their patriotic feelings openly, singing the national anthem – in both Czech and Slovak – shouting anti-German slogans and demanding the return of the free Republic. Some groups of students vandalized German storefronts. The Nazis responded violently. German civilian police started to fire to the crowds at random. In result, 15 people were wounded and Václav Sedláček, 22-year old worker was killed. Second victim of the brutal repressions was Jan Opletal, popular medical student who died of injuries few days later.

Opetal’s funeral on November 15 gathered around 3,000 students. At the beginning, the procession, closely monitored by the security police, was peaceful. The situation grew tense as some smaller groups of students started to sing the hymn and patriotic songs and chant provocative slogans. The driver of the car of the Secretary of State Karl Herman Frank was beaten up. The incident maddened Frank who - as some historians suggest - insisted on treating Czechs with firmer hand.

In response to the events, on the night of 16 November 1939 Gestapo raided student dormitories in Prague and Brno arresting hundreds of students and taking many others from their homes. It is estimated that over 1,200 students were deported to Sachsenhausen-Oranienburg concentration camp7. At dawn the next day, German shot nine alleged ringleaders of the demonstrations. Among them were eight students: Jaroslav Klíma, Jan Weinert, Josef Adamec, Jan Černý, Marek Frauwirth, Bedřich Koula, Václav Šafránek, František Skorkovský, as well as Professor Josef Matoušek. All Czech universities and institutes were closed; initially for three years, eventually till the end of the war – a move affecting nearly 20,000 students and university teachers. On 18 November, the Protectorate president Emil Hácha appealed not to engage in “senseless” and irresponsible resistance to the occupying German powers anymore, “lest Czechoslovakia face the same destruction as Poland”8.

November student protests were to be the last major Czech demonstration against the Protectorate government, but their victims and the determination in resistance against the Nazis were not to be forgotten. Two years later members of the Czechoslovak Army troops residing in England, including some of the former Prague students who managed to flee from the Protectorate, convinced student organizations of fourteen nations (including Great Britain, France, the Netherlands, Greece and Poland) to honour Prague students and commemorate the tragic events by establishing 17 November the annual International Students’ Day. Many universities in Britain even interrupted their classes that year to read the proclamation and therefore to pay homage to the executed Czech students.

After the war, 17 November became a national holiday in Czechoslovakia. During the Cold War, the communist regime used the International Students’ Day for its own propaganda purposes but since the 1968 Warsaw Pact invasion, the commemorations of 17 November were only formulaic. Yet, the celebration of the 50th anniversary of the Nazi atrocities in 1989 turned out to be exceptional. On 17 November, a week after the fall of the Berlin Wall, a 15,000-strong student crowd assembled at the Albertov Campus of Charles University in Prague, expressing their criticism and discontent towards the hated regime, demanding democratization and reforms. Josef Šárka, a participant of the Jan Opletal’s funeral fifty years earlier, expressed his support by addressing the crowds at the university campus: “I am glad you are fighting for the same thing as we fought for back then.”9 The students continued their demonstration, marching towards Wenceslas Square while singing the national anthem. They were then ambushed and beaten up by riot police. The police action triggered few days of protests that turned out to be the spark which ignited the Velvet Revolution, leading to the fall of the communist regime in Czechoslovakia.

Nowadays, 17 November is still a state holiday in Czechia and Slovakia although it is officially known and celebrated as the Day of Struggle for Freedom and Democracy. It commemorates both the anti-Nazi protests and the 1989 events.

The International Students’ Day is still observed on 17 November.

2. “Má vlast” (My fatherland in Czech) is a set of six symphonic poems composed between 1874 and 1879 by the Czech composer Bedřich Smetana. Each piece refers to Bohemian heritage, landscape, history or legends.

6. Jan Masaryk was a prominent Czechoslovak diplomat and politician; son of Tomáš Garrigue Masaryk, the first president of Czechoslovakia. Since 1925 he had been an ambassador to UK, but resigned in protest against the occupation of Sudetenland. When a Czechoslovak government-in-exile was formed in Britain in 1940, he became the Foreign Minister. He remained in his post after the end of the war – even after the Czech coup of February 1948 in which the Communist Party of Czechoslovakia, with Soviet backing, assumed undisputed control over the government of Czechoslovakia. Soon after the coup, on 10 March 1948, he was found dead, probably murdered on behest of the communist authorities.

William M. Mahoney, The history of the Czech Republic and Slovakia, Greenwood 2011