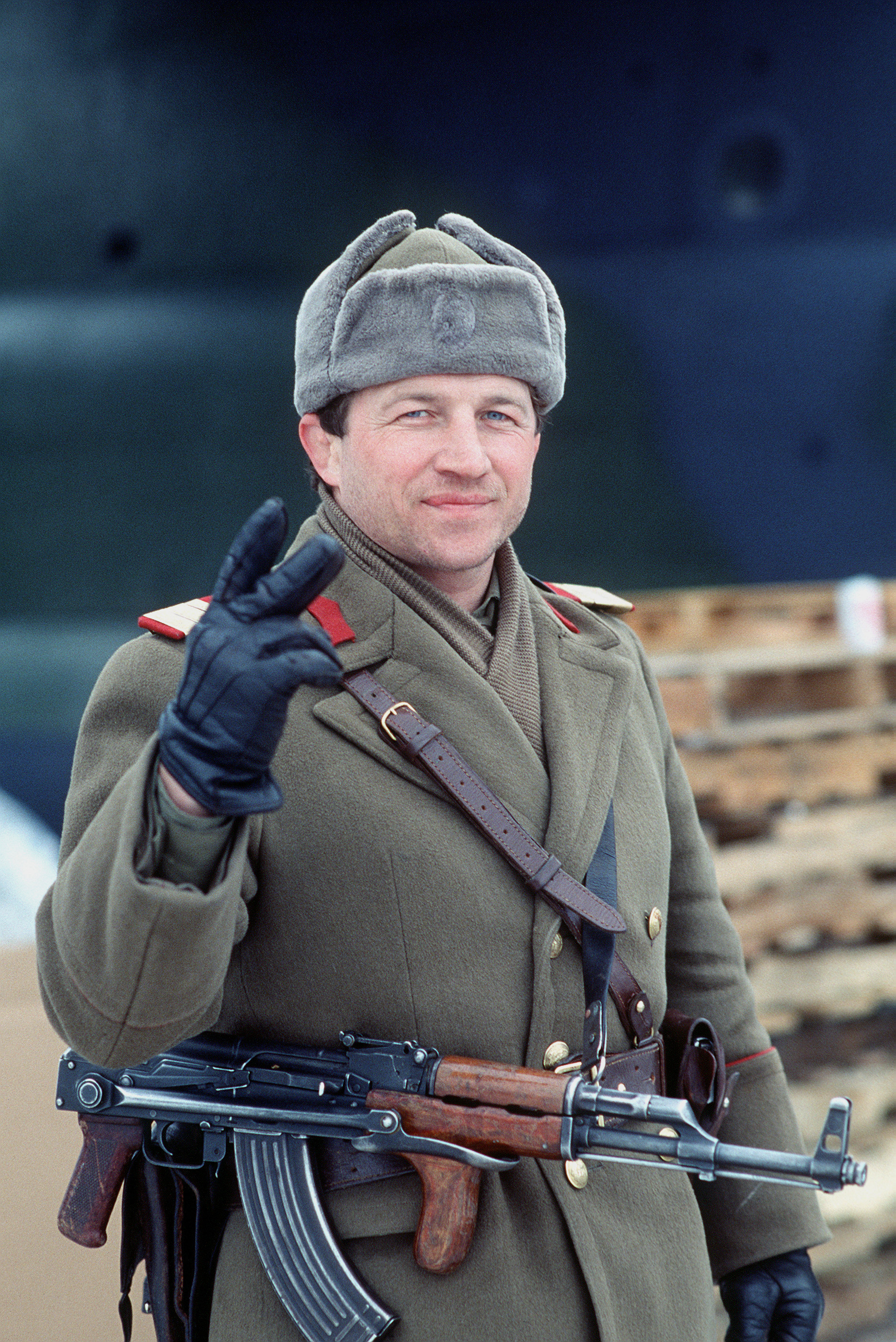 A Romanian sub-officer gives the victory sign on New Year's Eve 1989. He has removed the insignia of communist Romania from his headwear. Source: Wikimedia / https://research.archives.gov/id/6472645

In mid-December 1989 events in Timisoara launched the revolution which resulted in overthrowing the long-term Romanian dictator, Nicolae Ceausescu. Before the dictator and his wife were sentenced to death and executed, over a thousand people were killed and several thousand injured in riots.

Based on timeline prepared by dr. Florin Abraham

On 14 December, on discovering the authorities’ intention to implement the Court’s decision to evict Reverend Laszlo Tokes, 30-40 parishioners of the Reformed Church protested in front of his house on Timotei Cipariu Street in Timisoara. The head of the local Militia decided to halt the eviction to avoid further tension.

However, on 16 December, Nicolae Ceausescu ordered Militia and Securitate forces to re-establish order and evict Reverend Tokes. The officers were met with resistance of hundreds of protesters gathering around the Reverend’s house and shouting anti-Ceausescu slogans. The intervention resulted in violent clashes which led to even more unrest: people gathering and tearing down portraits of Ceausescu and red flags, building barricades and breaking windows in town centre shops. As a result, tear gas was used and several protesters were arrested. Laszlo Tokes was evicted on the following day. This did not put an end to the protests, on the contrary: military units coming into the town for a victory parade were attacked by a crowd of 4,000 people shouting slogans against the regime. The law enforcement services responded with tear gas and water jets, while the army used tanks and opened fire.

The clashes continued after Nicolae Ceausescu had left Romania for an official visit to . Facing the remobilisation of protesters, the authorities declared a state of emergency. As the demonstrations in Timisoara escalted, on 19 December the troops were sent to the town’s biggest industrial factories, in an attempt to keep the situation under control. Meanwhile, an anti-Ceausescu manifesto signed by SLOMR, a Romanian free trade union, was announced in some cities in Transylvania (Sibiu, Alba Iulia, Sebes, Deva, Targu Mures, Brasov, among others), calling people to strike.

On 20 Decemeber Timisoara went on general strike. Ioan Lorin Fortuna, one of the protest leaders, initiated the formation of the revolutionary committee called the Romanian Democratic Front (Frontul Democratic Român - FDR). FDR representatives held talks with the Prime Minister Constantin Dascalescu, laying down their demands: an inquiry into the killings which took place on 17 December and release of those arrested; resignation of Ceausescu and his government and the formation of a National Salvation government; guarantee of free press. On the same evening, Nicolae Ceausescu, who had by then returned from Iran, delivered a televised speech in which he condemned the events in Timisoara and accused foreign countries of involvement in Romanian domestic affairs.

On 21 December 1989, the FDR leaders read the Proclamation to 100,000 demonstrators from the balcony of the Opera House. In all the major towns of Transylvania, workers were striking in solidarity with Timisoara. The law enforcement forces were trying to dissuade people from openly protesting. At noon in Bucharest, hoping to win the popular approval of his policy and regime, Nicolae Ceausescu organized a public rally with the participation of tens of thousands of people. He addresses the crowds, promising increase in salaries, pensions, social aid and state allowances for children, but the people fled from the square. Troops were mobilized in the city to protect the Secretary General of the Party and his wife. The law enforcement forces intervened violently against the demonstrators, who shouted anti-Ceausescu slogans in several places in Bucharest, using tear gas and water jets, arresting people and even shooting at them. Military units were also mobilized in all the protesting towns in Transylvania, in order to intervene against the demonstrators.

On 22 December in all main towns of Romania, people took to the streets to continue the protests. General Vasile Milea, Minister of National Defence, refused to carry out Nicolae Ceausescu’s order to shoot the demonstrators and committed suicide. Nicolae Ceausescu declared a state of emergency throughout the country on national television and radio. The Army and Militia forces refused to shoot at people and took the side of the revolutionaries. Towards noon, the revolutionaries occupied the public television building.

Army was ordered to support the revolution and prevent further violence. Some former Securitate agents were attacked by angry revolutionary mobs in Sibiu, Cluj-Napoca and Harghita County. A formation of the National Salvation Front Council, the revolutionary structure that would guide the country during the coming months and organize free elections, was announced and all the structures of the former regime were dissolved. Acts of terror later became widespread throughout Bucharest and the entire country, especially in strategic areas such as airports, ministries, military buildings, public television and radio. Military units were in disarray and began attacking each other.

Nicolae and Elena Ceausescu were captured at Targoviste after their brief flight and taken into custody by the Securitate. They were transferred from the Targoviste Securitate headquarters to the military unit under the command of Colonel Andrei Kemenici.

Television continued to broadcast live events near the Central Committee, including various military units opening fire. At , Ion Iliescu presented the Statement of the National Salvation Front Council to the Country (CFSN). The document summed up the objectives of the revolution: to institute the democracy, freedom and dignity of the Romanian people, to dissolve the institutions of the Ceausescu regime, to ensure power is taken by the CFSN and the Superior Military Council, which will then create local branches in order to provide local government.

During the night, fighting continued in among unidentified group and all over the country, people were killed in the exchange of fire. Terror acts continued in the next days all over the country, resulting in several dead and injured, among both civilians and the military. The CFSN adopted exceptional measures calling for an immediate ceasefire in the country, the trial of the Ceausescus, the confiscation of weapons from civilians and the unification of the armed forces. On 24 December the CFSN leadership and the military decided to briefly try Nicolae and Elena Ceausescu and sentence them to death, with immediate execution.

On t Targoviste, the Exceptional Military Court accused Nicolae and Elena Ceausescu of genocide (64,000 deaths during their regime), undermining state power and the national economy and diversionist acts. They were sentenced to death and all their possessions were confiscated. At 14:50, Nicolae and Elena Ceausescu were shot dead by a firing squad. The Romanian Television broadcasted the news of the Ceausescus’ execution in the evening. At night, a short video was aired on Romanian Television showing the trial and execution of the Ceausescus. The CFSN decided to annul all the honours and titles awarded during their rule. Terror attacks diminished in intensity all over the country. The CFSN appointed Petre Roman as Prime Minster of the provisional government.

The first CFSN plenary meeting took place on 27 December to elect its officials (President – Ion Iliescu, Vice-President – Dumitru Mazilu) and adopt the new symbols of the country. The new leadership of the country was acknowledged by most states, including the United States, Hungary and the Soviet Union.