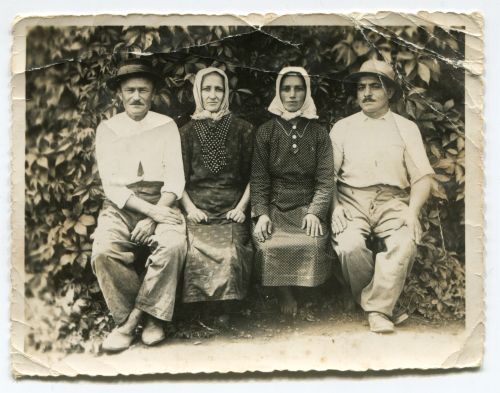 The story behind the picture

The "In Between?" project is about stories and history, but it is also about pictures. During each study visit, the participants scan archival documents, take hunderds of photos, and record video images in order to capture the wider context of the accounts which are shared with them. In order to emphasize this dimension of the project, each event organised in connection to the "In Between?" has a separate visual identification based on one of the pictures collected by the participants.

This time, for the seminar in Berlin in 2017, it is a photograph from the archives of Ms. Maria Gavra from the Hungarian-Romanian borderland. Here is its story:

"Regarding the picture, I can only give you an approximate date on which it was taken, but I can describe the historical context in more detail.

Firstly, the characters: on the right, with a lighter coloured hat, is my maternal grandfather, with my grandmother besides him. My grandfather's name was Radosav Mircu - born in 1907, in Bătania, to a Serbian father and a Romanian mother, having moved to Romania after the border changes - and my grandmother's: Radosav Maria - maiden name Păștean, born in Curtici, in 1910, into a Romanian family. Next to them there are their friends, Lungu Ivan - half Serbian, half Romanian - and his Romanian wife, Lungu Valeria, born in Pecica.

The picture was taken in Turnu, a village [in Romania] close to the border with Hungary, approximately one or two years after the end of the Second World War. Those were still rough times, with many shortages. Almost all the people who lived in the village were poor. The situation was the same across the border, in Hungary, but there they were lacking in salt, which one could find in Romania. However, it couldn't be transported legally across the border, so my grandfather, together with his friend Ivan, decided to start to sell salt on the black market.

There was a connection in this regard, as my grandfather, who was born and spent his childhood in Bătania (Battonya in Hungarian), knew enough people in that village, especially since he had an uncle there, Soldan Traian, with whom he had very close relations. In 1907, the year when my grandfather was born, the village Bătania (Battonya), in which many Romanians and Serbs lived, was part of the Austro-Hungarian Empire. After the border changes at the end of the First World War, my grandfather moved to the neighbouring village, Turnu, which had become by then a part of Romania. While there are only 6 kilometres between Bătania and Turnu, they have been separated by the border ever since.

Smuggling was very difficult, not only due to the risk of being caught, but also because carrying the salt on one's back was physically very demanding. They had to cross the border during the night, through the fields, not on the road, and when it rained, they could barely take their feet out of the mud. In the beginning, they were joined by a brother of my grandfather, also from Turnu, but he gave up quickly when he realised how difficult it was. Even I have memories from my childhood of my uncle telling the family: "I stopped going, I didn't do anything to deserve being put through this!"

At some point, my grandfather and his friend Ivan were caught and taken to the soldiers' picket of Turnu, and then they were taken back to Arad, to prison, for a short period of time (I can't tell you exactly for how long).

This picture was taken when the two of them came back from prison and were not sure what the future held in store for them. Many times peasants would take pictures of themselves in critical moments of their lives like disease, prison, when they didn't know if they would make it."

- from an account of Ms. Maria Gavra, born in 1957 in Turnu, currently teaching Romanian Language and Culture at University of Szeged.