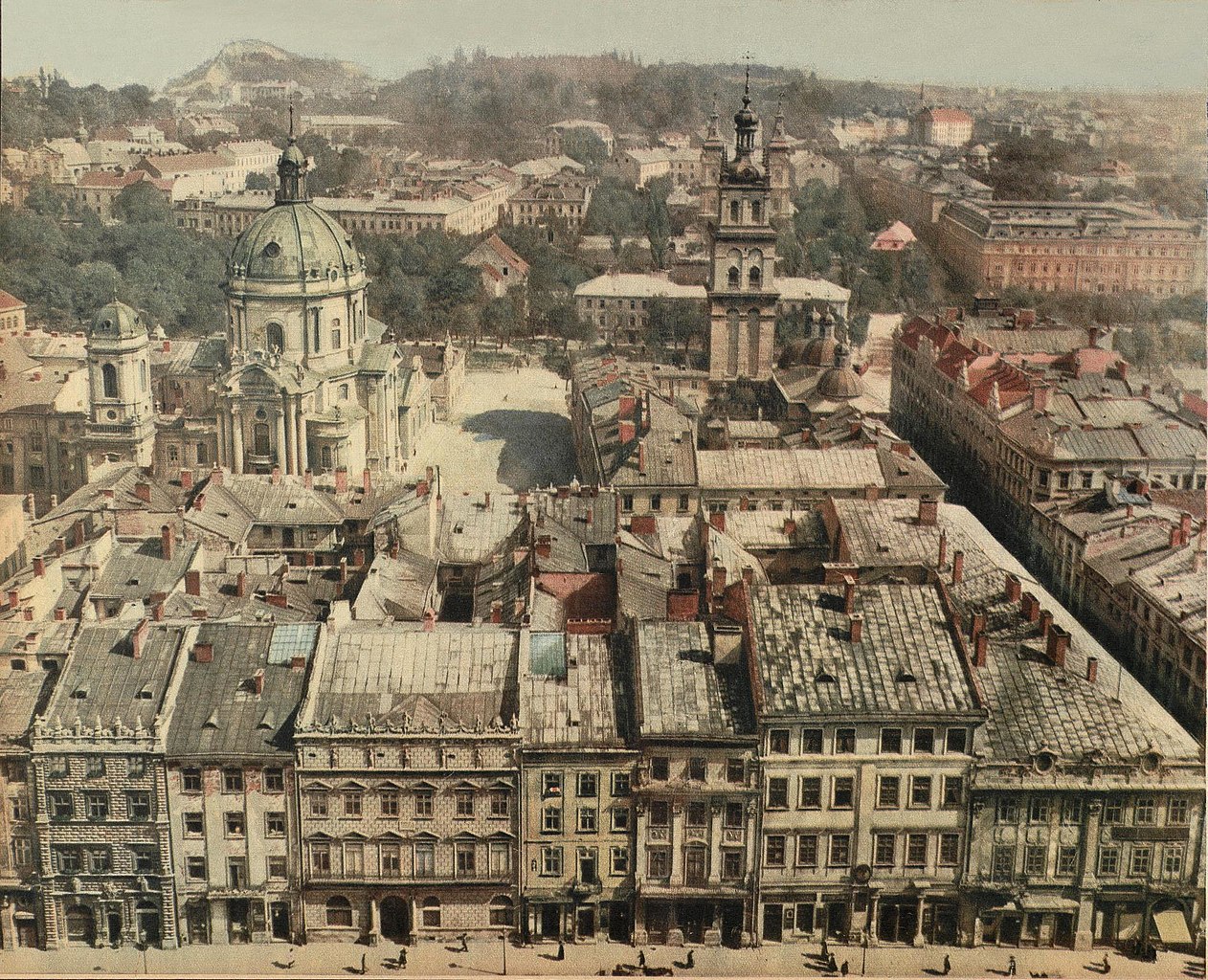 Ukrainian Lviv since 1991 – a city of selective memories

The history of west Ukraine and of former Galicia is more complicated than that of the rest of Ukraine. Galicia has belonged to many different states and powers. After the founding of Lviv by Prince Danylo in 1256 the region belonged to Poland for 400 years and was subsequently ruled by the Habsburg monarchy for 146 years (1772–1918). After the First World War, the region became part of independent Poland, in 1939/1941 came the Soviet and National-Socialist invasions which were followed by five decades of incorporation in the USSR, until Ukraine became independent in 1991.

In the 1930s the tri-ethnic population of the city of Lemberg/Lwów consisted of 51 percent Poles, around one third Jews and 16 percent Ukrainians. After the extermination of the Jews and the expulsion of the Polish population Lviv stood 85 percent empty. The city was taken possession of by Russian/Soviet bureaucrats, the military, and Ukrainian peasants. The city’s past as the cradle of a Ukrainian national movement was only revealed after Ukraine became independent. Today, in contrast to the strongly russified eastern part of the country, the city of Lviv, which is also the centre of western Ukraine, has become a haven of Ukrainian identity. This has led to the rise of antagonistic historical narratives, disparate “national memories”, with irreconcilable versions of events, heroes and martyrs.

After 1991, in their search for a connecting narrative which would show a continuous and uninterrupted Ukrainian past, the local authorities in Lviv commemorated a number of people, renaming streets after them, erecting monuments and commemorative plaques to them or honouring them in public commemorations. Leading figures of Ukrainian literature such as the poet Taras Shevchenko and the writer and freedom fighter Ivan Franko had already been previously celebrated as the bearers of Ukrainian culture under the Soviet regime. The leader of the Cossack Uprising in the 17th century, Bohdan Khmelnytsky, had also been included in the pantheon of Soviet-Ukrainian remembrance, even though he had attacked the city, which was Polish at the time, and did not defend it. The celebration of famous historical personages such as the historian of Ukrainian history Mykhailo Hrushevskyi or Mykhailo Drahomanov aims at constructing a pan-Ukrainian identity. The city has additionally contributed to creating a local tradition based on the specific history of Galicia (Halychyna in Ukrainian). This construction rests on complex processes of reversal, positive revaluation, rehabilitation, but also on the concealment of historical events and processes.

A first characteristic of this policy is the re-envisioning and updating of the city’s history to the almost complete exclusion of the Polish, Jewish and Soviet/Russian part of the city’s history. Lviv’s historic centre is a jewel of renaissance architecture while much of its later architecture was strongly influenced by the Viennese and Cracow Secessionists. But there are almost no public inscriptions indicating this. Today, only a few traces of this past remain: Yiddish or Polish inscriptions sometimes reappear as the paint flakes away. Nowhere do the local authorities officially commemorate the murder of the 160,000 Jews by the Nazis or the deportation of more than 100,000 Poles in 1945/46. The monument to the victims of the ghetto in Lviv, erected in 1992, was privately financed.

Everything which recalled the Soviet presence in the city also had to disappear. Similar to what took place in Riga and other Baltic cities, many monuments to the Red Army were dismantled. Russian schools were closed. In one district, Pushkin Street and Lermontov Street had to yield to street names honouring members of the Organisation of Ukrainian Nationalists (OUN) and of the Ukrainian Insurgent Army (UPA).

The second characteristic of this history policy is the creation of a Ukrainian national continuum in a city which only became ukrainised after 1945 and where there was practically no Ukrainian continuity. This invented continuity starts with Daniel, a 13th century Galician ruler, and stretches to include the Ukrainian pop singer Ihor Bilozir, who was beaten to death by Russians in 2000. In one leap the story progresses from the West Ukrainian People’s Republic, which was proclaimed in Lviv on November 9, 1918 and only existed for three months, to the “Act of Ukrainian Statehood” of June 30, 1941. With this Act the Ukrainian OUN nationalists Stepan Bandera and Yaroslav Stetsko, who had entered the city with the Wehrmacht, proclaimed an independent Ukrainian state but this independent Ukraine was only tolerated by Nazi Germany for a few days.

Ultranationalists, right-wing extremists and collaborators of the Nazis are being rehabilitated because they fought against the Russians. The Lviv Historical Museum has redesigned some of its rooms, titling them “Ukrainian efforts at liberation and independence”. In the suite of rooms, theorists and proponents of a radical fascist nationalism such as Dmytro Doncov, members of the Ukrainian Wehrmacht battalions Nachtigall and Roland and of the SS Division Galizien, which attracted almost 80,000 Ukrainians volunteers, are portrayed as heroes without any criticism or qualifications. Tributes are paid in particular to two personages of the OUN/UPA: Stepan Bandera, perceived in Poland primarily as a murderer, for whom a monumental memorial complex was erected next to the Church of St. Elisabeth in 2007, and Roman Shukhevych, the commander of the Nachtigall Battalion.

Changes to the names of the military units who collaborated with the Nazis are a new feature since 2006–2007, with the German names now yielding to Ukrainian denominations. Thus, the Wehrmacht Nachtigall Battalion now officiates as “DUN” (Druzhyna ukraïnskykh natsjonalistiv, Legion of Ukrainian Nationalists), and the SS Division Galizien as “U.D. Halytschyna” (Ukraïnska Divizja Halychyna) or “1st U.D. Halytschyna”. To this end, the death’s-heads, trimmings, mirrors, insignia and badges of the SS have been removed from the uniforms on display, trivializing the museum exhibits and playing down their connection to Nazi Germany.

The third characteristic of the politics of remembrance commemorating the city of Lviv is the invention of a new martyrdom. In the context of a “contest of victims” the aim is to find martyrs suitable to be placed on the altar of a national construction of memory. In Ukraine, this cult of victimization has taken the Great Famine (“Holodomor”) of the years 1932–1933 as its most important point of reference, and the government is currently endeavouring to obtain international recognition of the Holodomor as a “Ukrainian Holocaust”. In Lviv remembrance focuses particularly on the massacres carried out by the NKVD in the prisons of Lviv in the last days prior to the invasion of the city by the Germans in June 1941. The NKVD was given the order to either arrange for political prisoners to be transported to the interior of the USSR or to liquidate them. As the Germans rapidly advanced on the city, more than 4000 persons were shot in the prisons. Since 1991 such atrocities can once again be openly spoken of. The municipal authorities together with victims’ organisations have erected several monuments commemorating these tragic events. But none of these new monuments bear any references to the brutal pogrom openly perpetrated against the Jewish civilian population after the invasion by the Wehrmacht by a vengeful mob, the Ukrainian auxiliary police force and Ukrainian nationalists under the approving eyes of the Nazis.

The amalgamation of nationalist heroes and victims of Stalinism in a joint mausoleum amounts to a sanctification of Ukrainian suffering. The mausoleum was consecrated in Łyczaków/Lychakiv Cemetery in 2006. This new part of the cemetery was designed so as to tower above the Polish military cemetery of the First World War (Cmentarz Lwowskich Orląt), which it thus symbolically displaces. The memorial site also pays tribute to the Nachtigall Battalion and the SS Division Galizien (“1st U.D. Halychyna”). In 2006 the municipal authorities announced their intention of moving the remains of Stepan Bandera, Yevhen Konovalets, Andrij Melnyk and other leaders of the OUN/UPA and reburying them there.

Lviv has been seized by a remembrance mania – but only a selective politics of remembrance and musealisation is brought to bear on the past. The focus is only on the rebirth of the Ukrainian nation and on Ukrainian suffering. The city’s multicultural legacy is forgotten and suppressed.

How will Polish, German, American and Jewish tourists recognise themselves and their narratives in this landscape of monuments? How do such policies fit in with the hoped for integration of Ukraine in Europe? With this revisionist blanking out, will future generations of West Ukrainian pupils still realise that these “heroes” enlisted in the ranks of the Wehrmacht and the SS? Will questions once be asked as to what extent they collaborated in the “ethnic cleansing” of Poles and Jews? All serious questions in view of the problematic selective representations of history which have changed and shaped the museums, streets and monuments in Ukrainian Lviv since 1991.

translated from German by Helen Schoop