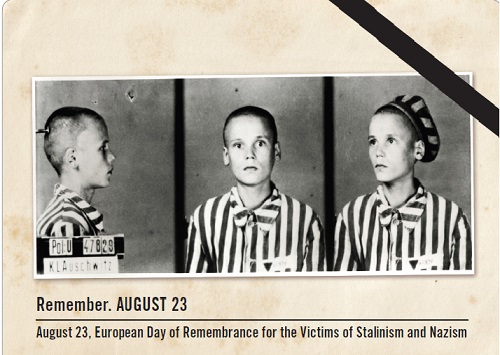 The European Day of Remembrance for Victims of Stalinism and Nazism

Next month, for the second time ENRS will launch the informational campaign aiming at raising consciousness about the European Day of Remembrance for Victims of Stalinism and Nazism.

On 23 August, special set of postcards presenting inmates from Nazi and Stalinist prisons and camps in different Central and Eastern European countries will be distributed in Riga, where the official commemorations of the European Day of Remembrance for Victims of Stalinism and Nazism will be held. Postcards will be also sent to institutions dealing with the past in Europe, universities and associations and made available to wider public (you will have the opportunity to order it via ENRS website).

In 2008, 409 members of European Parliament signed the declaration on the proclamation of 23rd of August as European Day of Remembrance for Victims of Stalinism and Nazism. It was on this day in 1939 that two totalitarian states divided Europe among themselves and although the collaboration between Nazism and Stalinism was relatively short lived, for 20th century Europe this period was comparable to the opening of the mythical Pandora’s box.

The Ribbentrop-Molotov Pact facilitated military aggression, annexation of whole states or regions, and created the framework conditions for the Holocaust, deportations of nations and social groups, mass murder, and ethnic cleansing.

The postcards and pins are to remind us all of the fallen, whom we shall never forget.