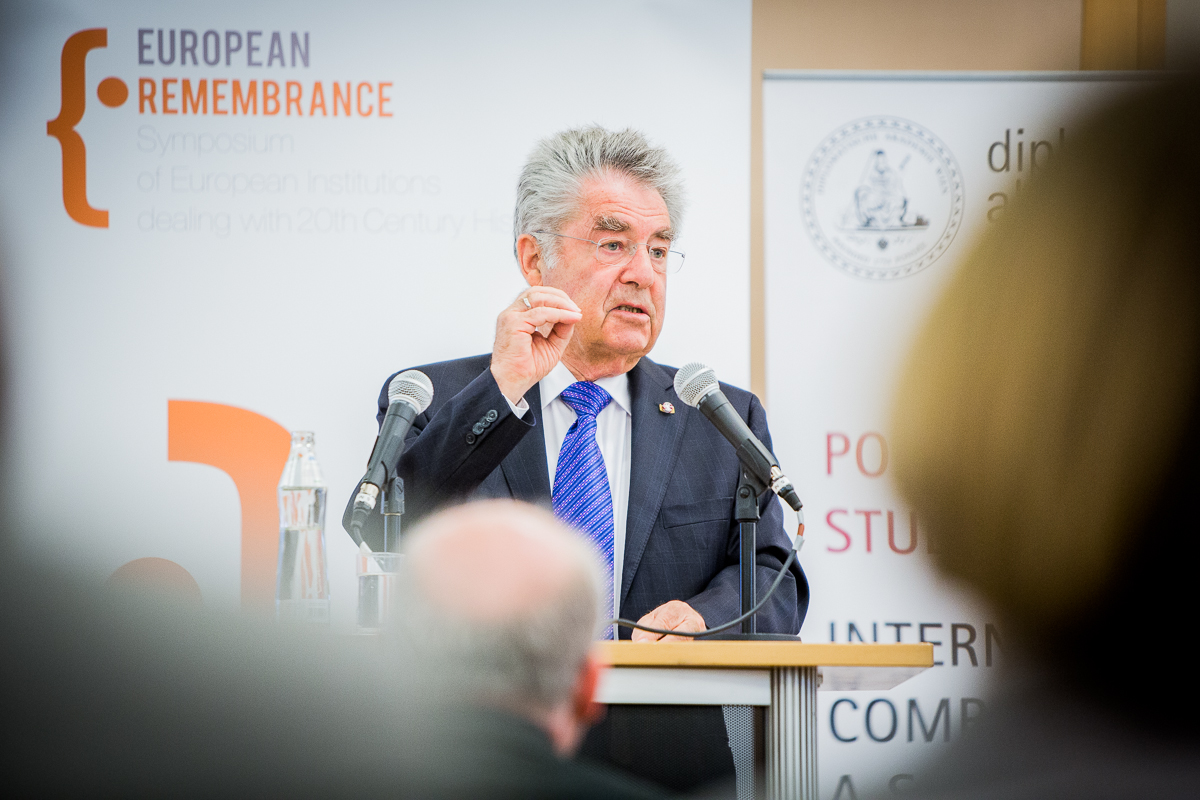 Conclusions of the European Remembrance Symposium in Vienna

The second day of the4th International Symposium of European institutions dealing with 20th-century history in Vienna was opened by the Federal President of the Republic of Austria Dr Heinz Fischer who addressed the participants saying that to discuss means to ask questions, to learn from history, and to draw conclusions.

Referring to the history of Austria as well as to the subject of this year Symposium Dr Fischer stressed the fact that in case of Austria, the terms ‘perpetrators’ and ‘victims’ are not that easy to define. Austria was at the same time the nation of perpetrators and victims. According to the President of Austria, just after the war there were no perpetrators as people thought that orders came from superiors and everybody was a victim. Only later the discussion about the painful history has started.

Attended by over 200 representatives from 120 institutions dealing with the history of the 20th century, the Symposium was dedicated to the memory of the Second World War and all those who took part in it.

The first panel discussion on the second day of the Symposium was devoted to a subject never raised during previous editions – the art, mainly the interpretations and images of the Second World War. Anda Rottenberg – art critic and historian, curator of many exhibitions pointed out that the most intriguing phenomenon for contemporary artists is not the hell of the war itself, but the mechanism in which facts are repressed and replaced by fiction, as well as the inevitable process of effacing the memory of the events.

Dr Monica Bohm-Duchen, London-based writer, lecturer and curator pointed out that under the pressure of circumstances many people felt like they had to make images, even if they did not do it before the war. She also stressed the importance of the usage of these original images and sources from the witnesses as they have a huge educational value – witnesses themselves gradually disappear.

While summing up the panel on remembering the Holocaust under dictatorship, Dr Karen Franklin from the International Committee of Memorial Museum in Remembrance of the Victims of Public Crimes of the International Council of Museums (ICOM) said: We must point our lens towards the future, and consider coming years in which subsequent generations will bear added responsibility for distilling and sharing memories of the War, as it affected them personally, or, more often, affected their parents, grandparents, and great-grandparents – and we, and they, must not only interpret the years of the Holocaust, but seek to understand America’s particular response to it, as well as the fluid nature of Holocaust memories over subsequent decades.

On the last day of the Symposium there was a vivid discussion after a panel entitled: Different ways to remember totalitarian regimes in Europe. How to talk about the crimes of the 20th century without equating them. Professor Richard Overy from the University of Exeter said: There are obvious commonalities between the two dictatorships in the period of the World War. Some commentators have tried to count the number of dead under the two systems to see which of the dictators, Hitler or Stalin, was the more murderous. This is scarcely a useful exercise, since it explains nothing even if it acknowledges how murderous the two regimes were. Nevertheless, there are obvious common features in the way the two dictatorships worked and the impact the dictatorships had on the area described by Timothy Snyder as the ‘Bloodlands’, Each dictatorship set up its own moral standard to achieve a distant utopia: the moral imperative for the German dictatorship was a biological one, preservation of the German race at the expense of all others; the moral imperative of the Soviet system was sociological, the construction of a social system that privileged workers, poor peasants and party intellectuals.

The discussion afterwards concentrated on the notion of moral standards and memory and was provoked by professor Habbo Knoch from the University of Cologne, who said that we should set moral standards first and then define memory.

Detailed programme of the symposium is available at europeanremembrance.enrs.eu.

Some video recordings from the Symposium are already available on our youtube channel.

A series of European Remembrance symposiums was launched in September 2012 in Gdańsk. Subsequent editions took place in Berlin and Prague. The next Symposium will be held in Budapest in 2016.

The organiser of the Symposium in Vienna:

Ludwig Boltzmann-Institute for Research into Consequences of War

Foundation for the Memorial to the Murdered Jews of Europe

Federal Foundation for the Study of Communist Dictatorship in East Germany

Among partners there are:

Academy of Sciences in Budapest