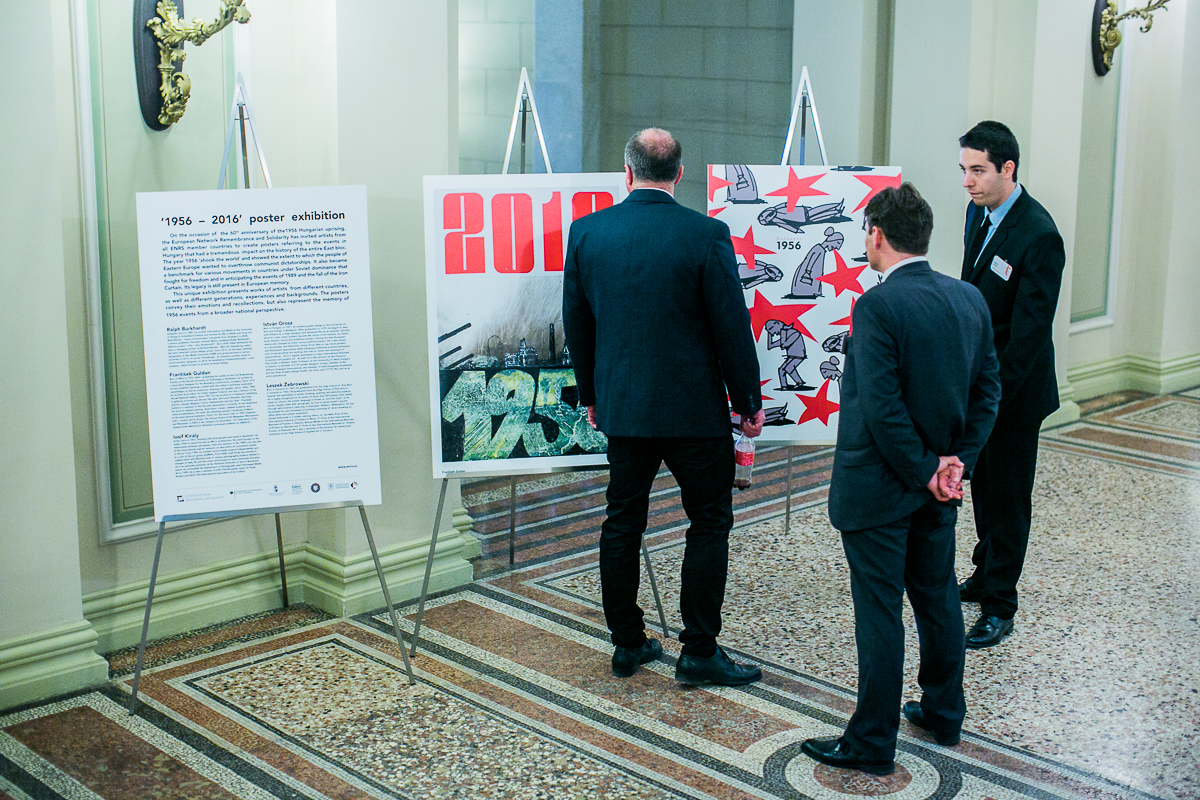 On the occasion of  the 60th anniversary of  the1956 Hungarian uprising, the European Network Remembrance and Solidarity has invited artists from all ENRS member countries to create posters referring to the events in Hungary that had a tremendous impact on the history of the entire East bloc.

The year 1956 ‘shook the world’ and showed the extent to which the people of Eastern Europe wanted to overthrow communist dictatorships. It also became a benchmark for various movements in countries under Soviet dominance that fought for freedom and in anticipating the events of 1989 and the fall of the Iron Curtain.  Its legacy is still present in European memory.

This unique exhibition  presents works  of artists  from different countries, as well as different generations, experiences and backgrounds.  The posters convey their emotions and recollections, but also represent the memory of 1956 events  from a broader national perspective.

The exhibition has been first presented within the programme of the 5th European Remembrance Symposium entitled 1956. Contexts, Impact, Remembrance in Budapest.

Ralph Burkhardt
Designer, born in 1980. He studied Information and Media at the University of Design in Schwäbisch Gmünd and worked for Büro Uebele and Jung von Matt/Neckar -visual communication companies from Stuttgart. In 2006, a famous publisher, Hermann Schmidt Mainz, published Ralph Burkhardt’s  diploma project ‘rotis – eine Streitschrift’. Since 2009, Ralph Burkhardt has been a managing partner of Burkhardthauke – Büro für Gestaltung, which has been awarded various design prizes. Since 2012, he has been teaching typography at the Media University (HdM) and giving  lectures in various countries. In 2015, he wrote  ‘Printdesign’, an extensive practice book for communication designers. In 2016, he established ‘burkhardtschwarz’ a new company,  which focuses on product-oriented design.

Frantiśek Guldan
Born in Nitra in 1953. After completing his studies at the Civil Engineering Faculty at the Slovak University of Technology in Bratislava, he worked as a renovation designer for the Bratislava Construction Company. Since 1974, he has exhibited paintings created with the author's technique (patinated assemblage) as well as sculptures, drawings and graphic pieces. After 1989, he worked as an editor for Public Against Violence and was a director of the Slovak National Gallery. Since 1991, he has worked as a freelancer exhibiting in galleries at home and abroad (Slovakia, the Czech Republic, Germany, Austria, Canada, Belgium, France, Netherlands and the USA).  Frantiśek Guldan is a member of the Gerulata Association. Currently, he has dedicated his work to cabinet painting, illustration, mosaic, welded sculpture and cultural publications. He holdsthe following awards: Certificate of Merit at the international exhibition 'Súhry' for the work 'Cela' in 1992 (together with J. Kodoň and B. Kraus), the Annual Award of the Magazine 'Monuments and Museums' in 2002 in the category of restoration - for restoration of the Chatam Sofer Memorial in Bratislava (proposed addition to UNESCO).

Iosif Király
Artist, born in 1957, working with photography and based in Bucharest. He holds a PhD in visual arts and an MA in architecture. His work focuses on the relationship between perception, time and memory. In the 1980’s, he was part of the international mail-art network, an alternative art movement rooted in Fluxus. From 1990, he created various media projects independently and as a part of the art group subREAL. From 2000, Iosif Király has worked in collaboration with Mariana Celac in various photographic projects related to changes of daily life and the urban environment in post-communist Romania. He is an associate professor at the National University of Arts in Bucharest, where he co-founded the department of Photography and Time-based Media Art in 1995. He is also a member of UAP (The Romanian Union of Visual Artists) and AICA (The International Association of Art Critics).

Istvan Orosz
Born in Hungary in 1951, he studied graphic design at the University of Arts and Design in Budapest. After graduation in 1975, he began to deal with theatre as a stage designer and animated film as an animator and film director. Later, when posters became the centre of his interest, he mainly drew theatre, movie and exhibition posters. During the East-European democratic changes he drew various political posters. He is also known as a printmaker and illustrator. Istvan Orosz likes to use visual paradox and illusionistic approaches while following traditional printing techniques such as woodcutting and etching and tries to renew the technique of anamorphosis.  He is a regular participant in major international biennials of posters and graphic art.  As well, he is film director at the Pannonia Film studio in Budast, Habil. Professor at the University of  West Hungary in Sopron , co-founder D.O.P.P  poster designer society, member of the Alliance Grapique International, and member of both Hungarian Academies and the Utisz Graphic Design Studio. He often uses OYTIΣ (No one) as an artist pseudonym.

Leszek Żebrowski
Born in Szczecin in 1950. He graduated from the High School of  Fine Arts in Gdańsk and specialises in poster drawing, painting and editorial projects. He is highly recognized as an author of more than 350 posters that mainly relate to culture. His artistic language is known as ‘portrait style’. In his works, usually made with aerograph, he tries to show model’s psyche through deformations (referring to Stanisław ‘Witkacy’ Witkiewicz). He has developed his own technique of printing consisting of  direct drawing on offset plate and proper exposition.
Leszek Żebrowski is a holder, among others, of  the Main Prize of the International Triennial of Posters In Mons, 2nd Prize at the International Biennale of Posters in Teheran, Bronze Medal at the International Biennale of Posters in Warsaw and 3rd Prize at the International Biennale of  Theatre Posters in Rzeszów. He is also a laureate of the Szczecin Art Award and professor at the High School of  Applied Art in Szczecin.