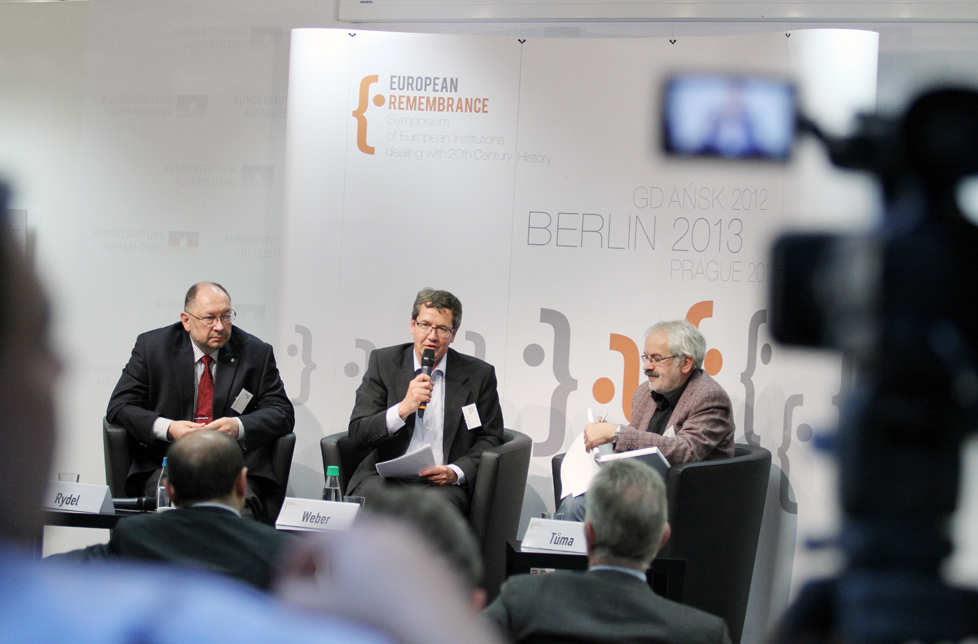 The Symposium was attended by more than 200 representatives of 23 European countries and 120 key institutions focusing on research and proliferation of historical knowledge and on developing the culture of memory.

‘In its complexity and in all aspects, Poland’s history is key to understanding Central and East European history in the 20th century,’ said Dan Diner, Israeli historian and director of the Simon Dubnov Institute of Jewish History and Culture in Leipzig at the ‘European Remembrance’ Symposium, which closed on Saturday in Berlin.

The Symposium, co-organised by European Network Remembrance and Solidarity (with its Warsaw-based Secretariat), the Federal Foundation for Reappraisal of the Socialist Unity Party Dictatorship (Berlin), and the European Solidarity Centre (Gdańsk), was attended by more than 200 representatives of 23 European countries and 120 key institutions focusing on research and proliferation of historical knowledge and on developing the culture of memory. The three days of the conference days spent exchanging experience and engaging in lively discussions concerning points of connection and unity in European memory as well as elements causing it to be oversimplified and falsified.

National perspectives and difficulties with developing a joint vision of history were debated by representatives of educational and scientific centres, museums, non-governmental organisations, and public institutions. Symposium attendees were given an opportunity to learn about the work of international organisations active in structuring dialogue around memory-related policies in various European countries, such as the Baltic Initiative and Network and the RECOM Initiative (Coalition for Establishing a Regional Commission for Truth-seeking and Truth-telling About War Crimes – RECOM). A visit to the German Historical Museum was included in the agenda as well.

In emphasising how much remains to be done in establishing dialogue between the historical interpretations favoured by individual countries, Head of European Network Remembrance and Solidarity Rafał Rogulski recalled a recent infamous example of historical manipulation in the film industry, which triggered a dispute concerning Our Mothers, Our Fathers, a German TV series. A single reckless or manipulated media message may cause major damage to mutual European relations, awakening negative neighbourly emotions or reigniting resentment. This is why it seems to be of paramount importance to ensure top-draw standards when disseminating knowledge of common European history. Initiatives such as our symposium make such objectives feasible.

British historian Keith Lowe remarked that the East and West share a propensity to justify actions and negligence alike. ‘Whereas we all want to be remembered as heroes or victims, we all have to face up to the truth,’ Lowe declared. The author of Savage Continent further highlighted Poles as archetypal victims and heroes. ‘Poles were the only nation to form a previously unheard-of underground state of millions during the Second World War. The Poles can be proud of the resistance they put up against the German and Soviet occupant,’ added Lowe.

In a speech closing the Symposium, German political scientist Gesine Schwan commented extensively on how joint historical memory may impact Europe’s future. She believes that memory requires activity and is not a thing of passiveness. ‘Joint historical memory may only be based on common values acceptable to all European nations, such as human rights, as historical experience and the appraisal of past events are vastly different in individual countries,’ Schwan emphasised. ‘Notwithstanding the above, experiential diversity is far from a threat – it is a form of normality, serving to enrich the continent.’

The event organisers announced that the Symposium’s next edition shall be held in Prague, with the European Commission joining the organisation team as part of the Europe for Citizens programme. ‘We hope for “European Remembrance” to become a permanent item on the agenda of events important to the memory of culture as a platform enabling experience exchange, discussion, dispute and co-operation, as well as personal experience of the memory of culture in the country hosting the Symposium,’ declared Rafał Rogulski.

The series of ‘European Remembrance’ Symposiums began in September 2012 in Gdańsk, with more than 100 representatives of 14 countries and 66 institutions convened.

For detailed information on the event please visit: