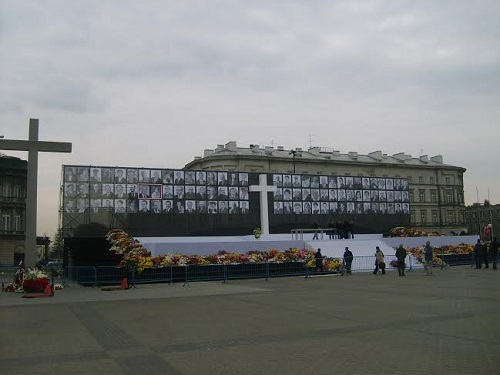 The 4th anniversary of the plane crash in Smolensk

On 10th of April 2010 occured the biggest tragedy in a postwar history of Poland.

The presidential plane Tu-154M crashed near Smolensk (Russia) killing 96 persons. Amongst them the Polish President Lech Kaczyński with his wife, the last Polish President in exile, Ryszard Kaczorowski, Deputy Minister of Culture and National Heritage and initiator of European Network Remembrance and Solidarity Tomasz Merta, Secretary General of the Council for the Protection of Memory of Combat and Martyrdom and also one of originators of ENRS Andrzej Przewoźnik, highest officials from Polish state institutions, the command of the Polish Army and many others.
There is no better way to show the personalities than through memories of the others:

‘Andrzej Przewoźnik could have become a history professor. He dreamed about it during his studies in Cracovia. It was meant to be different(…)one of the most overworked civil servants. Thanks to him Russia gave its permission to build a cemetery of the Polish officers in Katyn. He was organizing there commemorating ceremonies. Katyn was his biggest obsession and the biggest but not the only one success. (…) He was tough and  adamant during negotiations. He was not giving up.’ (Stanisław Kostka, former member of the Home Army, historian and close friend of Andrzej Przewoźnik and his family in an interview given to Polskatimes on 17-18 of April 2010)

‘Everybody needs peace and quiet, hardly anyone is able to achieve it and hand down to the others. Exactly such a rare skill had Tomek Merta. (...) He was going to Smolensk not in quest for the historical truth - as the truth about Katyn is already known - but to make next generations and in the best case - other nations - know about it.(...) (Timothy Snyder, American historian, in Rzecz o Tomaszu Mercie, Gazeta Wyborcza 16.04.2010)

'(...) Not only had he thousands books at home. He read them all! (...)About difficult things like about nation, community, patriotism, culture he was talking and writing in strikingly easy way. Easy because authentic. Simply he was talking about what he was living in.(...)' (Robert Mazurek, Polish journalist, friend of Tomasz Merta,  in Wprost 17/2010)

They all went there to commemorate the 70th anniversary of genocide committed by NKVD in the Katyn Forest. The irony of history that taking care about memory of 22,000 Polish officers, public servants and top of the Polish elite, these 96 had to pay the biggest price for this remembrance.

*more articles (in Polish) mentioning each and everybody who died on 10th of April 2010 one can find on smolensk.muzhp.pl.