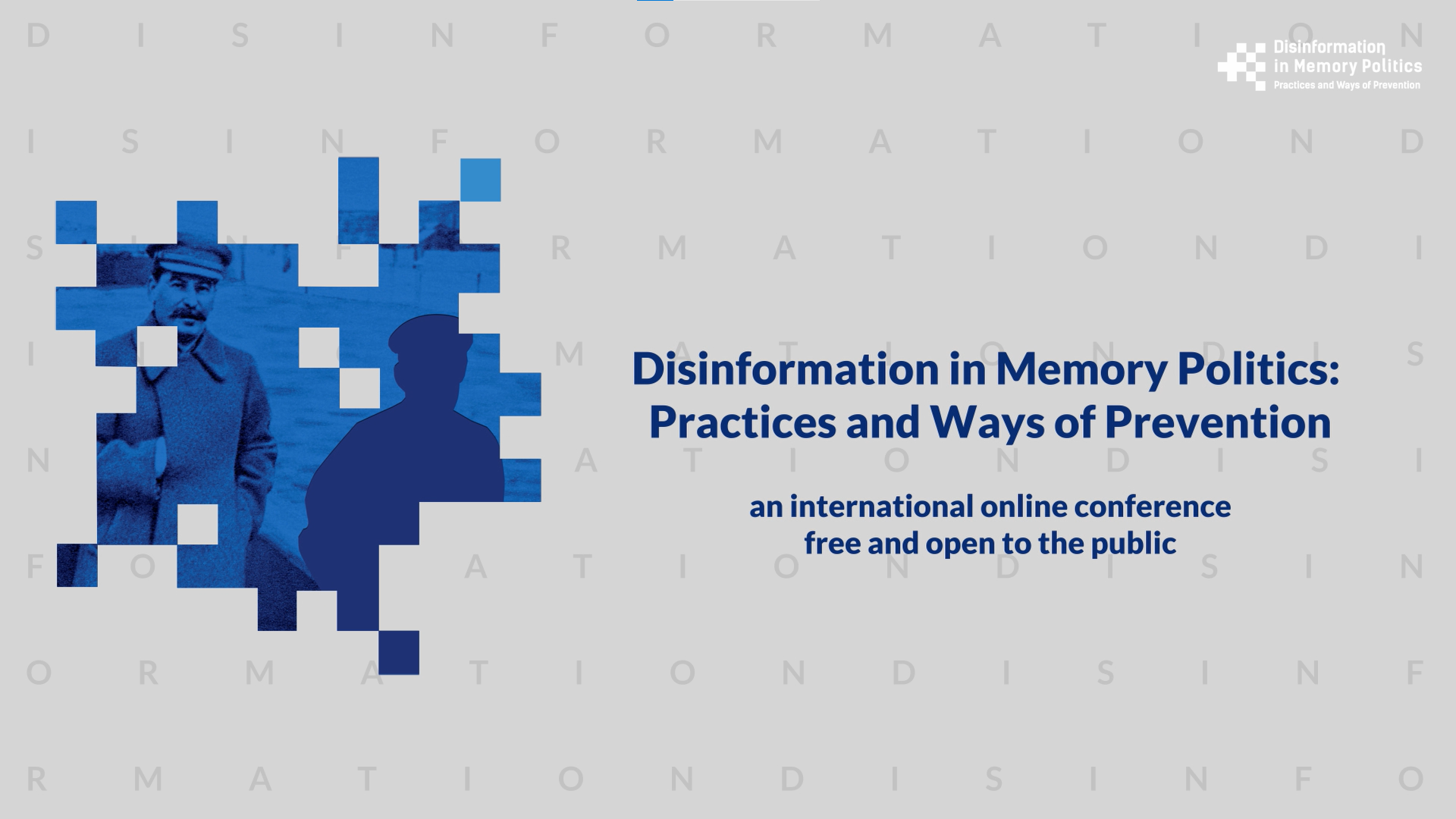 Disinformation in Memory Politics: Practices and Ways of Prevention

Although disinformation is an old and well-tried tool of political power, the rapidly changing modes of communication in the increasingly digital and globalized media market dominated by social platforms, necessitates a re-examination of this phenomenon. This rings particularly true in the year 2021, marked by proliferation of real-world consequences of fake news, from the storming of Capitol Hill to the continuous protests against COVID vaccination efforts. While it is too soon to judge whether the beginning of the new decade marks a distinct shift in our political and cultural norms, the events of past years can certainly be seen as effects of gradual processes of political polarization. These processes are accompanied by increasingly aggressive forms of manifesting various, often radical, political and social positions.

In such turbulent times, historical memory makes for the particularly appealing target for intentional dissemination of falsehoods. Its strong connection to personal and collective identity means that it is easy to create misleading but emotionally resonant narratives, which can be used to further political goals. Thus, it falls on historians and communication specialists to ask what role disinformation plays in memory politics. How, by whom, and what for are those tactics employed? What can be done to prevent the manipulation of historical facts and spread of counter-factual historical narratives?

Those were the questions tackled during the international online conference “Disinformation in Memory Politics: Practices and Ways of Prevention”, which took place on 11–13 May, 2021. The event, Co-organized by ENRS, National Institute for the Study of Totalitarianism and College of Communication and PR of the National University of Political Science and Public Administration in Bucharest, gathered an international body of academics and practitioners working in the fields of legislation, education and communication. hree days of panel discussions and lectures, all streamed publicly on YouTube and Facebook, were full of intriguing insights, practical proposals, and gestures toward further questions and problems that are yet to be explored. What follows is a brief overview of the main themes explored during the conference.


Disinformation and history. Studying the past to re-evaluate the present

The opening debate concerned the theoretical and methodological problems posed by the historian's continuous search for objectivity. Its participants--Nicholas J. Cull, Marek Kornat, and Adrian Pop - laid the groundwork for establishing a unifying framework for the later panels by differentiating between legal, academic, and popular approaches to history, and pointing toward intent as a crucial point of distinction between disinformation and misinformation. They also discussed the ethical dimensions of the historian's craft. It is particularly the latter part of the debate, that established themes that resonated throughout the conference: the historian’s responsibility to search for the truth, and examine their own biases, the necessity to engage with the erroneous but captivating narratives about the past and to understand the causes for their appeal, and value and potential pitfalls of institutionalized efforts of historians and other professionals to combat disinformation.

Therefore, the first two panel discussions of the conference which focused on the differing approaches to the politics of memory and totalitarian regimes and disinformation in the field of current memory politics, not only presented a broad scope of case studies, but also demonstrated how scholars should responsibly engage with disinformation, past and present. Presentations by Richard Overy and Łukasz Adamski discussed the use of Soviet past in Russian politics of memory, both in foregin and internal policy. Presented by Adamski conclusion that contemporary Russian disinformation campaign found more success at home than abroad resonated with the findings of Thomas Wegener Friis and Marcela Sălăgean, who spoke about the active measures of disinformation and manipulation in GDR and during Romanian December of 1989 respectively. Speakers of the second panel--Attila Pók, Serena Giusti, Juraj Buzalka, and Ivo Juurvee--discussed contemporary memory politics, but also highlighted the struggle of historians in their search for truth and objectivity in the face of epistemological uncertainty. The conclusion reached by the end of discussion was that it might not be possible for historians to find the ultimate truth, but they can help to detect the ultimate lies in the public space. The importance of history writing based on verifiable proofs and argument that at the same time embraces individual perspectives,subjectivities, and nuances was underscored by panelists, who recognized the glanced-over gaps in the official narratives hiding unreconciled and often problematic aspects of the past that can serve as a fertile ground for counterfactual historical narratives.

Listening to a tin-foil hat crowd: Studying the mechanisms and understanding the appeal of conspiracy theories

Given the topic of the conference, it is hardly surprising that the issue of social mechanisms enabling the spread of false historical narratives and more broadly - conspiracy theories - was identified by many participants as a crucial subject of investigation. Thus, the keynote lecture delivered by Alina Bârgăoanu and the fourth panel of the conference were devoted to the issue of the actors, methods and techniques of contemporary disinformation, focusing on the role of fake news and conspiracy theories. Bârgăoanu tackled the case of COVID-19 pandemic as an opportunity to study mechanisms of disinformation, conspiracy theories and their cultural adaptation to the local, Romanian context, stressing the need to treat the threat posed by such narratives seriously. Erikur Bermann, highlighted the similarities between populism and conspiracy theories, which both provide the way of reducing the socio-political complexities to the manichean narratives of us vs them. The capability of conspiracy theories to animate large social movements through simple, captivating narratives was further explored by Marcin Napiórkowski, who stressed the importance of understanding the appeal behind the conspiracy theories in creating effective tools of dealing with disinformation. This belief was also shared by the last speaker of the second day of the conference, Todd Leventhal, who shared his experiences in combating disinformation as an employee of the Global Engagement Centre. Among the best practices he highlighted were discrediting the sources of fake information, focusing on the harmful and tangible impact of false claims, using metaphors and analogies, and making clear to the public the larger, covert motivations behind the perpetrated narratives.


Looking for solutions - tools and strategies of combating disinformation

Finally, much of the conference was dedicated to the search for appropriate institutional responses and strategies of combating disinformation, with speakers of third and fifth panel discussions paying particular attention to the role of unchecked digital media and education. The broader, political context of digital disinformation was outlined in two presentations. Florin Abraham sketched the overview of geopolitics of cyberspace, highlighting the role social media as a tool of projecting soft power in contemporary international politics, while Maria Snegovaya demonstrated how calculated political opportunism leads some political groups in Central-Eastern Europe to embrace the historical narratives dictated by Russian officials. Two other panelists, Michael Žantovský and Paolo Cesarini, focused on the broadly defined solutions to the phenomenon of contemporary disinformation transmitted through social media. The latter proposed a multi-faceted approach aiming at promoting more competitive media markets, media literacy education and accountability of social media platforms, all the while accentuating the need to find solutions that would not encroach on the fundamental freedoms and principles. Žantovský in turn argued that the best way of combating disinformation on social media might lie in the reexamining of the concept of privacy in the digital sphere, creating an “internet of the real people” that would better reflect the role of social media as a public sphere. The question of the role of another fundamental value--freedom of speech--was raised by Eric Langenbacher in his comparison of German and American memory politics and education, which provoked interesting questions on the limits of free speech and cultural attitudes toward it.

The place of education in combating disinformation was elaborated upon by other speakers. The overview of the ENRS-developed toolkit “No to Disinformation” was one of the main points of Łukasz Kamiński’s presentation, who further urged historians to act as public authorities on social media, sharing not only their general historical knowledge but also their skills in source criticism. However, the results of the study presented by Joel Breakstone suggested that when it comes to the verification of sources on internet, both college students and professional historians do a worse job than expected, highlighting the importance of more research-based guidelines for navigating the digital environment. Finally, a presentation by Joanna Wojdon reminded the audience that educational materials and textbooks are a double edged sword and can also be used for disinformation.

The closing panel discussion served as a coda to the themes brought forward during the whole conference, becoming an attempt at transforming the disparate measures of combating and preventing the disinformation discussed during the conference into a set of recommendations and guidelines for prevention of disinformation in historical and memory politics. Igor Gretskiy focused on the internal inhibitions of disinformation, pointing out the limits of impact of alternative narratives peddled by political actors, demonstrating how factors like demographics, past experiences and ideological upbringing, or material conditions can lead to the rejection by the public opinion of even strong efforts to change the historical narrative. Bartosz Dziewanowski-Stefańczyk and Jan Rydel presented attempts at creating a codified set of rules of best practices and conduct in German-Polish historical dialogue. They both underlined that creation of such formalized tools of fixing historical narratives, while increasingly tempting in a world of rising political polarization, should come with the caveat of not stifling the academic discussion.

This poignant remark reflected hopes and anxieties voiced during the conference, concerning historian’s role in creating fact-based and understandable for the public narratives and explanations on the one hand, and being free to question and seek nuance on the other. It also reflected the generally agreed-upon consensus of all speakers that any legal and non-legal means of policing the historical discourse will have to be heavily scrutinized by academics and the public. Without offering easy answers, the discussions after the panel presentations highlighted the weaknesses and strengths brought by the often seemingly contradictory efforts of Western democracies to pursue politics of memory that strive to create unfing, emotionally resonant and factual historical narrations which are at the same time inclusive toward individual perspectives found in pluralistic society.

Lern about 'Disinformation in Memory Politics'