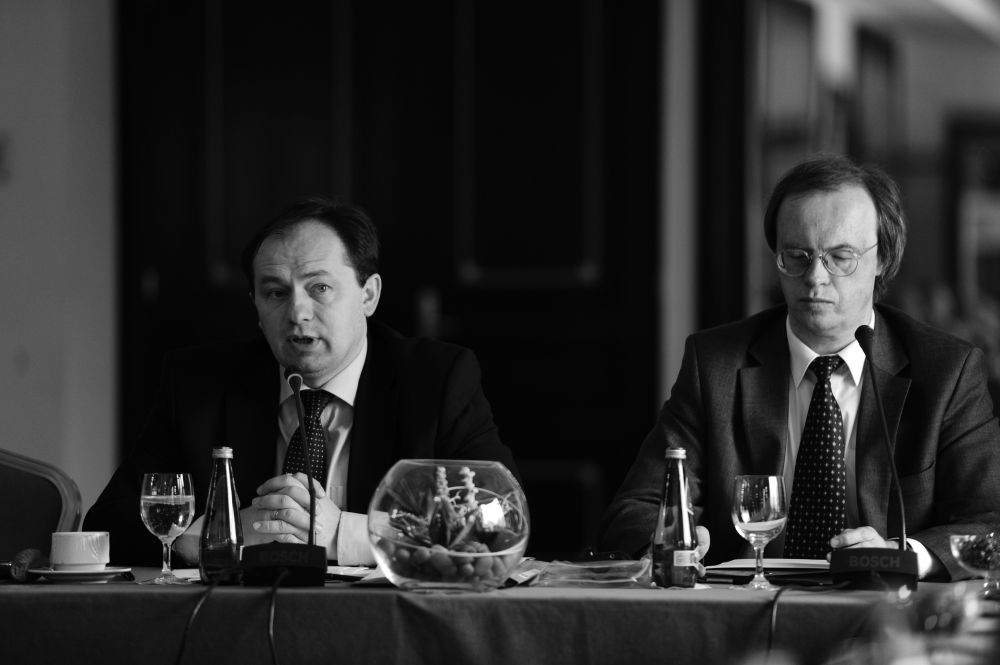 Andrzej Przewoźnik and Polish Deputy Minister Tomasz Merta were involved in creation of the ENRS, acting as inspirators and supporters of the Network. They both died tragically in an aeroplane crash near Smoleńsk in April 2010.

Secretary General of the Council for the Preservation of Struggle and Martyrdom Sites for many years, Andrzej Przewoźnik was never in the foreground of the Polish public sphere. Still, he was considered a model public official and a hardworking man, not afraid of challenges and keen to be involved in the performance of seemingly impossible tasks. He was one of the pivotal figures involved in the project of the European Network Remembrance and Solidarity.

Andrzej Przewoźnik was a historian both by profession and by passion. He completed his studies in History at the Jagiellonian University and it was Poland’s newest that he always had a keen interest in. Przewoźnik spent his younger years in Krakow, where already at the end of the communist period he was active in the-then underground Solidarity. After the fall of communism, he worked for local authorities in Krakow, serving on the council of the Zwierzyniec city district and the Province Office in Krakow. It did not take long, however, before he joined an institution that proved to be the vocation of his life: in 1992, aged only 29, he was appointed Secretary General of the Council for the Preservation of Struggle and Martyrdom Sites. Virtually his entire later activity and numerous accomplishments are linked to the post he had held for nearly 18 years.

Many of the things Andrzej Przewoźnik engaged in required lengthy efforts, painstaking negotiations and diplomacy. His major successes undoubtedly include the creation, in Russia and post-Soviet countries, of a complex of Polish Wartime Cemeteries opened in 2000 in Katyn, Kharkiv and Mednoye. Przewoźnik’s personal involvement was a vital factor during the negotiations with Ukrainian authorities concerning a reconstruction of the Cemetery of the Lviv Eaglets, successfully completed in 2005. He considered a matter of prime importance to commemorate the sites of death and burial of Polish soldiers and victims of the Second World War. Thanks to his determination wartime cemeteries appeared along the trail of Anders’ Army in Kazakhstan and Uzbekistan, as well as the section of Home Army soldiers at Rasos Cemetery in Vilnius, while numerous Polish graves and cemeteries across the globe were either restored or built.

In Poland, he was also engaged in difficult tasks, in particular those related to the remembrance of the Holocaust. He organised and supported the orderly and respectful commemoration of victims of the Nazi death camps in eastern Poland: in Belzec, Treblinka, Sobibor and Chelmno on the Ner. He also made a massive contribution to the creation of a memorial for the remembrance of the Jews murdered in Jedwabne. Przewoźnik also cared for the graves of German and Austrian soldiers in Poland and negotiated an agreement with Russia concerning graves and monuments of Red Army soldiers fallen on Polish soil.

His long work on the borderline between history and politics was evidence for him of the importance of making attempts at building a European culture of remembrance based on dialogue and respect for the past, taking into consideration different perspectives and experiences of European nations. The initiative to establish the European Network Remembrance and Solidarity was a step towards building such an understanding.

As a historian, Andrzej Przewoźnik had a particular interest in the Katyn Massacre and wanted that tragic event to be explained and the truth about it disseminated. He authored and co-authored a number of publications on the topic. In his research work, he also focused on the Polish Underground State and Polish exiles in Hungary. He was the editor-in-chief of the historical yearbook “Niepodległość” (Independence).

Andrzej Przewoźnik died tragically in a plane crash near Smolensk, on the way to the commemoration event for the 70th anniversary of the Katyn Massacre, which to him was such a vital component of Polish history. In 2010, he received a posthumous distinction of the Grand Cross of the Order of Polonia Restituta.

Tomasz Merta was a Polish historian of idea and public official. He served as the Polish Deputy Minister of Culture and National Heritage in 2005-2010. He was posthumously decorated with the Commander's Cross with Star of the Order of Polonia Restituta, and also posthumously with the Gloria Artis Gold Medal of the National Education Commission.

Among Tomasz Merta main interests were patriotic education and historical memory. He was looking for modern ways of expressing the traditional values, which constituted in his opinion the basis of political community. Tomasz Merta was the main person responsible for European Network Remembrance and Solidarity in the Ministry of Culture and National Hergitage.

Everybody needs peace and quiet, hardly anyone is able to achieve it and hand down to the others. Exactly such a rare skill had Tomek Merta. (...) He was going to Smolensk not in quest for the historical truth - as the truth about Katyn is already known - but to make next generations and in the best case - other nations - know about it.

Not only had he thousands books at home. He read them all! (...) He was talking and writing about complex things such as nation, community, patriotism, culture in a strikingly easy to understand way. Easy to understand because it was authentic. He was simply talking about what he was living in.