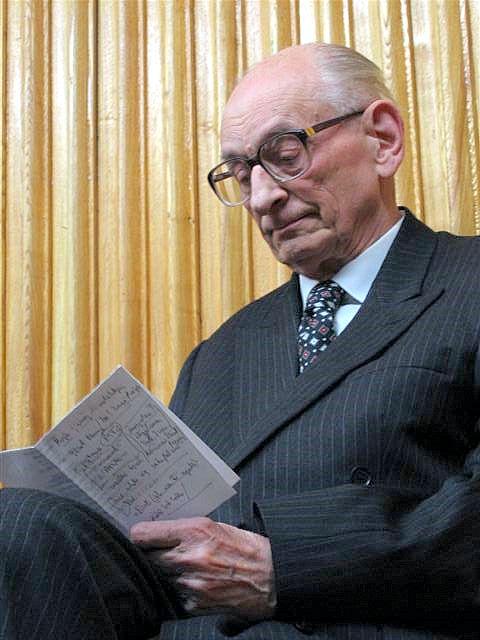 100th anniversary of the birth of Władysław Bartoszewski

It is worth being decent' - Professor Bartoszewski used to say, despite the fact that his life was marked by the greatest horrors of the 20th century.

As a 17-year-old, he was a prisoner at the German-Nazi Auschwitz concentration camp. Released after more than six months following the intercession of the International Red Cross, he became a soldier of the Home Army (Armia Krajowa), where he worked in the unit documenting Nazi crimes. He was also a member of "Żegota", an underground organization providing aid to Jews in German-occupied Poland.

After 1945, he was active as a journalist and politician, seeking to preserve parliamentary democracy and political pluralism in a communist-dominated Poland. Arrested twice, he was convicted on the false charges of espionage. He spent six and a half years in a Stalinist prison.

Released from prison in 1954, he worked as a historian, researching the occupation period in Poland, and as a journalist. He was a lecturer at the Catholic University of Lublin. In the 1970s and 1980s, he was the secretary general of the Polish PEN-Club. For many years he was a secret correspondent for Radio Free Europe.

After 1989 Bartoszewski held a number of public posts in Poland: he was twice the minister of foreign affairs, served as the Polish ambassador to Austria, and was elected a member of the Senate. During his last years he was the Prime Minister’s plenipotentiary for international dialogue. He supported the creation and activity of the ENRS.

Władysław Bartoszewski died 7 years ago, on 24 April 2015, and left an exceptional legacy of moral values and humanity. He was a chevalier of the Order of the White Eagle and he was awarded the title of the Righteous Among the Nations by Yad Vashem. He was also an honorary citizen of Israel.

He was one of the great cultural heroes both during and after the Second World War, from the struggles against tyranny through the process of renewing democratic systems, said Shevach Weiss, a former Israeli ambassador to Poland. His biography is our biography.

To commemorate the 100th anniversary of his birthday, the year 2022 was established by the Resolution of the Senate of the Republic of Poland as the Year of Władysław Bartoszewski.

In celebration of the anniversary, Polish Institute in Wien asked a number of politicians and public figures, including ENRS director, Rafał Rogulski, to share their memories of prof. Bartoszewski. The film is available on YouTube in German language version: You can watch it here