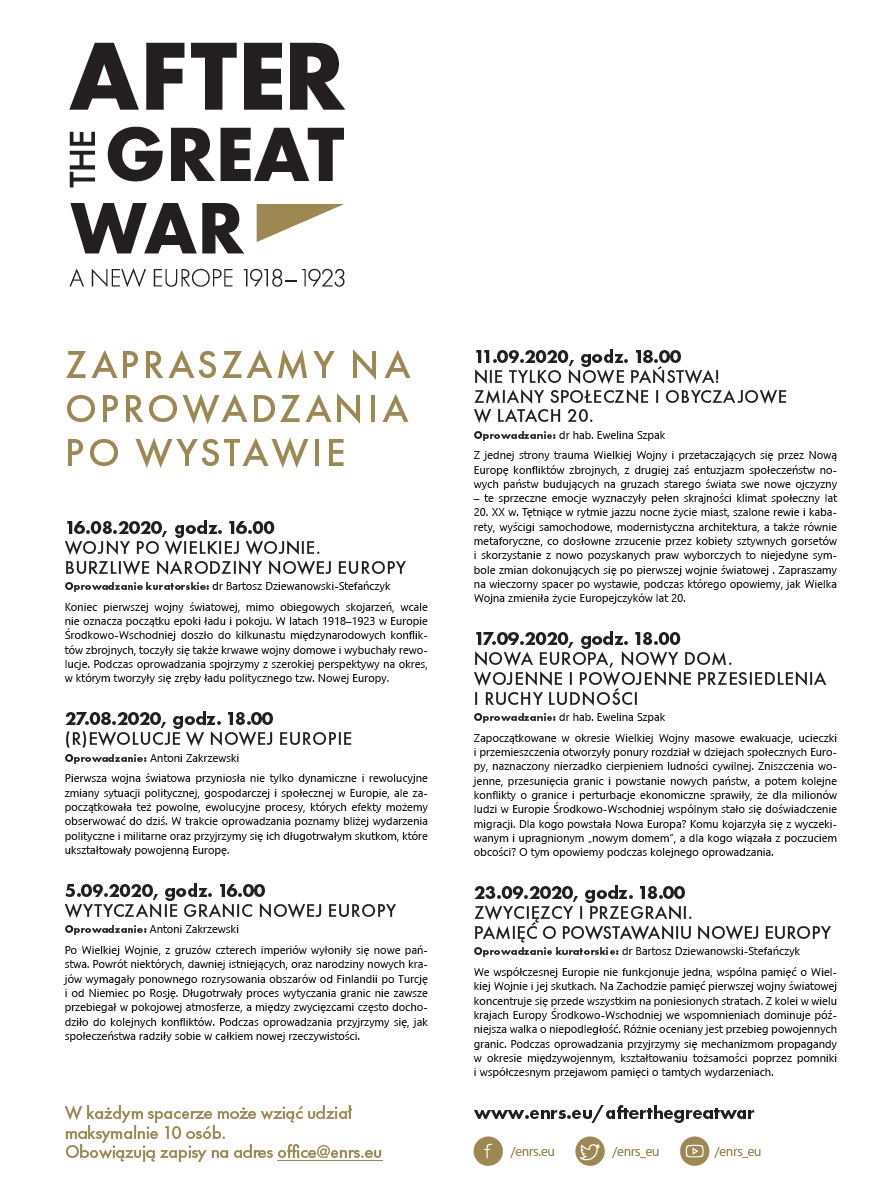 After the Great War in Warsaw: guided tours

European Network Remembrance and Solidarity invites everyone to take part in special guided tours accompanying the "After the Great War. A New Europe 1918-1923" exhibition in Warsaw. Here you can find the full programme.

Wars after the Great War. The tumultuous birth of New Europe

Contrary to popular belief, the end of the First World War did not at all mean the beginning of an era of peace and order. The period of 1918–1923 in East-Central Europe saw a dozen or so international armed conflicts as well as bloody civil wars and revolutions. During the tour, we shall look from a broad perspective at the time when the foundations of the political order in ‘New Europe’ were being laid.

The First World War brought about not just dynamic and revolutionary changes in Europe’s political, economic and social life but also the start of slow evolutionary processes whose effects can be observed until today. During the tour, we shall learn more about some political and military events as well as look at their long-term consequences which shaped post-war Europe.

Delineating the borders of New Europe

After the Great War, new states emerged from the rubble left by four empires. The return of some, previously existing, and the birth of new states required a redrawing of territories from Finland to Turkey and from Germany to Russia. The long process of border delineation was not always peaceful and new conflicts would often flare up between the victors. During the tour, we shall look at how societies were coping in an entirely new reality.

Not just new states! Social and societal changes in the 1920s

The trauma of the Great War and armed conflicts raging through New Europe on the one hand, and the enthusiasm of societies of the new countries building their statehood on the rubble left by the old world: such contradictory emotions marked the social climate of the 1920s which was filled with extremes. Urban nightlife pulsating to the rhythm of jazz, heady revues and cabarets, car races, modernist architecture, as well as the equally metaphorical and literal shedding of rigid corsets by women and their exercise of the newly acquired electoral rights are not the only symbols of the changes taking place after the First World War. We invite you to take part in an evening tour of the exhibition during which we shall discover how the Great War changed the lives of Europeans living in the 1920s.

The mass evacuations, escapes and displacements that started during the Great War opened a bleak chapter in Europe’s social history, frequently marked by suffering of its civil population. Due to the wartime destruction, border movements and the emergence of new states, followed by further border disputes and economic woes, migration became a shared experienced for millions of people in East-Central Europe. For whom did New Europe emerge? Who associated it with an expected and longed-for ‘new home’ and who with a sense of alienation? This will be our focus during yet another exhibition tour.

Winners and Losers. Remembering the emergence of New Europe

In contemporary Europe, there exists no single common memory of the Great War and its consequences. In the West, the memory of the First World War focuses mainly on the losses sustained back then. In turn, in many countries of East-Central Europe that memory is dominated by the later fight for independence. Likewise, there is no unequivocal assessment of the borders delineated after the war. During the tour, we shall have a look at the propaganda mechanisms in the interwar period, identity building by means of monuments as well as contemporary manifestations of remembering those past events.

Due to the COVID-19 situation in every tour can take part up to 10 people.

Read the Rules of the exhibition

Read the Rules of the guided tours

Learn more about the exhibition "After the Great War"