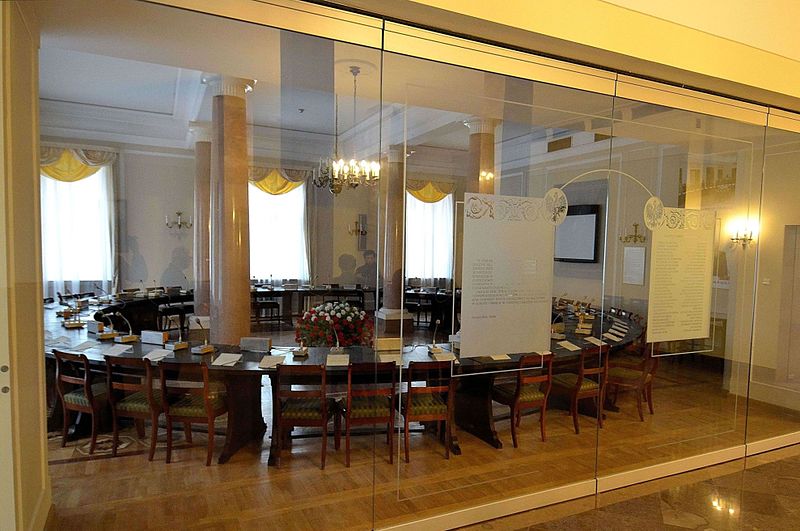 The original round table displayed in the Presidential Palace in Warsaw / Adrian Grycuk / CC BY-SA 3.0 PL

Beginning of the Polish Round Table Talks

The original round table displayed in the Presidential Palace in Warsaw / Adrian Grycuk / CC BY-SA 3.0 PL

Preparations for the negotiations between the communist government and the opposition started much earlier. On the 27 August 1988 general Czesław Kiszczak, the Minister of Internal Affairs, declared: I have been authorised (…) to meet the representatives of various social groups and labour. These meetings may take the form of a ‘round table’. A series of preparatory meetings took place at the end of 1988 and beginning of 1989. Lech Wałęsa, leader of the opposition, said prior to the talks: I’d be prepared to talk with the devil himself if it would do some good for Poland. The final date and agenda of the Round Table Talks was set on 27 January 1989 in Magdalenka, in the villa owned by the Ministry of Internal Affairs.

The talks were not easy and not once did they go into a deadlock which was then resolved during special negotiations in Magdalenka. During the talks, however, the opposition and the government representatives managed to reach some level of agreement. Krzysztof Dubiński, private secretary of the Minister of Internal Affairs Czesław Kiszczak’s said: The authorities eventually saw that the people facing them were not enemies or foreign agents but normal people who were thinking in terms of the national interest. Jacek Kuroń, one of the leaders of opposition wrote in one of reports from the Round Table talks: Yesterday we still stood in the trenches of two opposing armies, which fired upon each other and destroyed everything in their path. Today a completely new social, political, psychological situation has arisen.

On 5 April 1989, after two months of negotiations, the final document was signed. The key decisions included early, partially free elections to the Polish parliament (no more than 35% seats for the opposition) and free elections to the Senate, the authorisation of an independent daily newspaper, air time for the opposition on radio and television, the announcement of free elections no later than in 4 years' time, permission to restore the organisations and creative associations banned after 13 December 1981 (including “Solidarność”) and the promise of returning assets and jobs to people made redundant after the period of martial law.