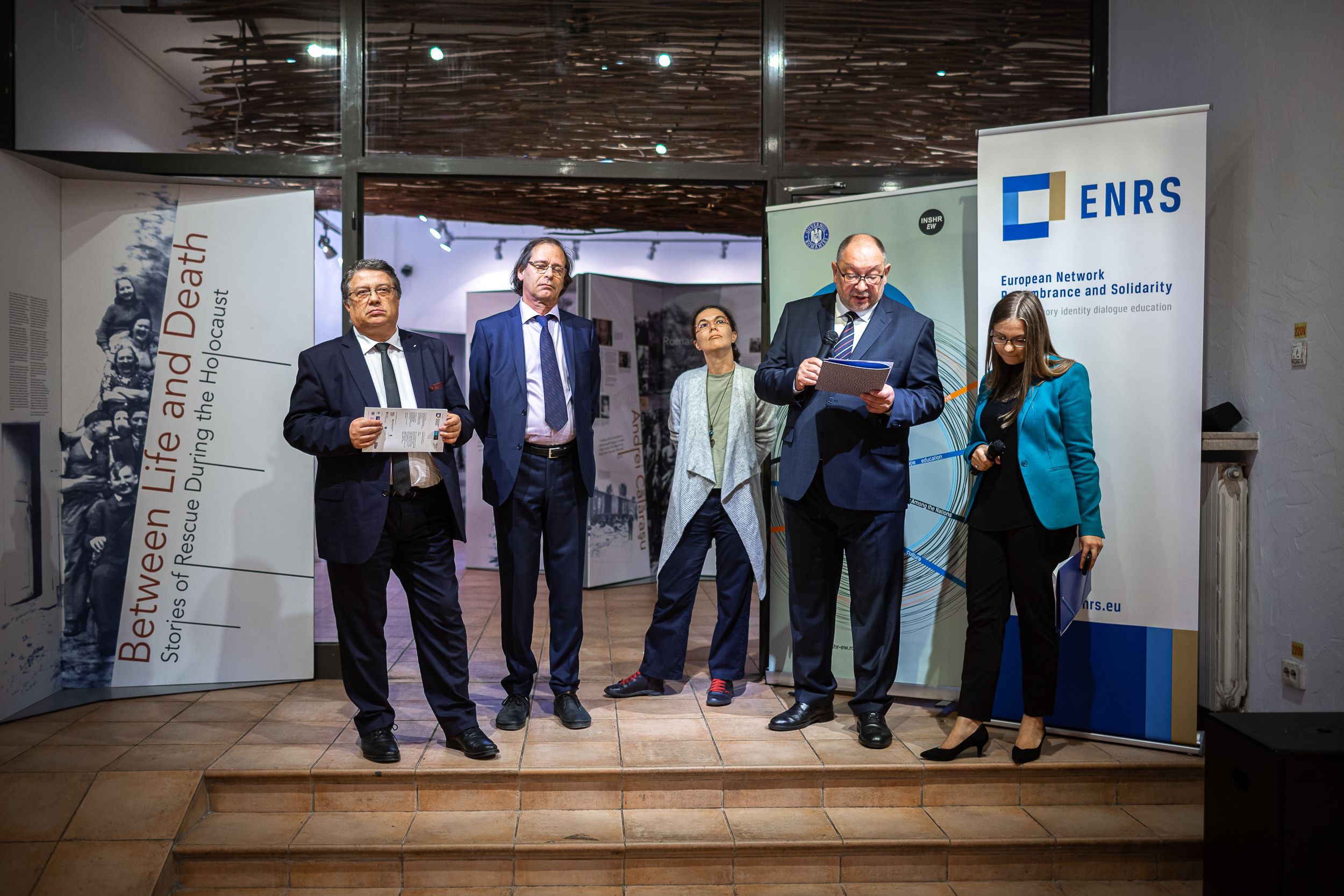 "Between Life and Death" exhibition has opened in Bucharest

"Between Life and Death. Stories of Rescue During the Holocaust" exhibition has opened in Bucharest, where it will stay until 20 October. Its presentation coincides with the National Day of Commemorating the Holocaust in Romania on 9 October.

The exhibition focused on Holocaust survival and the aid provided to those in need during one of mankind’s darkest hours is now being presented within the walls of the National Museum of the Romanian Peasant.

For its showing in Romania, the exhibition has been expanded so as to include two additional panels. The first presents the stories of Andrei Călăraşu who managed to endure inhuman conditions of an over a week-long train journey to a forced labour camp, and of Magdalena Stroe, a Righteous Among the Nations, who as a 15-year-old girl gave her own personal documents to a former Jewish classmate and thus saved her life. The second panel is dedicated to diplomats from different countries who facilitated rescues of Jews from territories under German control.

The Romanian panel has been prepared with a substantive contribution from the "Elie Wiesel" Institute For the Study of Holocaust in Romania.

The ceremony began with an opening speech from Mr Virgil Nitulescu, the Director of the National Museum of the Romanian Peasant. He commented on how the Holocaust discourse has evolved over decades in Romania and highlited the important link between confession of guilt and acknowledging merits: "The Romanian state formally accepted its responsibility for participating in the Holocaust, only in 2004. In contrast, many historians have emphasized, since the communist regime, that there were Romanians who received the title of "Righteous Among the Nations". Now, here is a logical gap. If you do not recognize that there were victims, then you can ask yourself why the Yad Vashem Institute granted this honorary title to Romanian citizens? In fact, negationism has no historical basis and must be combated, with the same force with which we must highlight the exceptional cases of some nationals who have proven that they can be in solidarity with other people, especially when their life was put in danger."

The next speech was delivered by Prof. Jan Rydel, the deputy chairman of the ENRS Steering Committee. Prof. Rydel referred to those who - like Magdalena Stroe - "decided that when faced with evil, they simply had to stand up - and by doing so, they saved the moral order prevailing in our world.” Then, Prof. Rydel evoked the philosophical category of metaphysical guilt as defined by Karl Jaspers – the burden which is borne by all those who don’t do their best to prevent evil, which "no worldly court can judge."

The opening was concluded with a speech by Mr Alexandru Florian, the General Director of the "Elie Wiesel" Institute For the Study of Holocaust in Romania. Mr Florian offered a clear and strong statement: “When seeing this exhibition, one can only think that even today being indifferent and not reacting to non-democratic or illiberal decisions of the authorities, decisions that affect ‘the others’, enables the occurrence of tragedies similar to the Holocaust. This is the message of the exhibition and the lesson that we have to learn. The lesson of how not being indifferent makes the difference!”

The “Between Life and Death” exhibition can be seen at the Aquarium Hall of the National Museum of the Romanian Peasant till 19 October.

Read more about the display