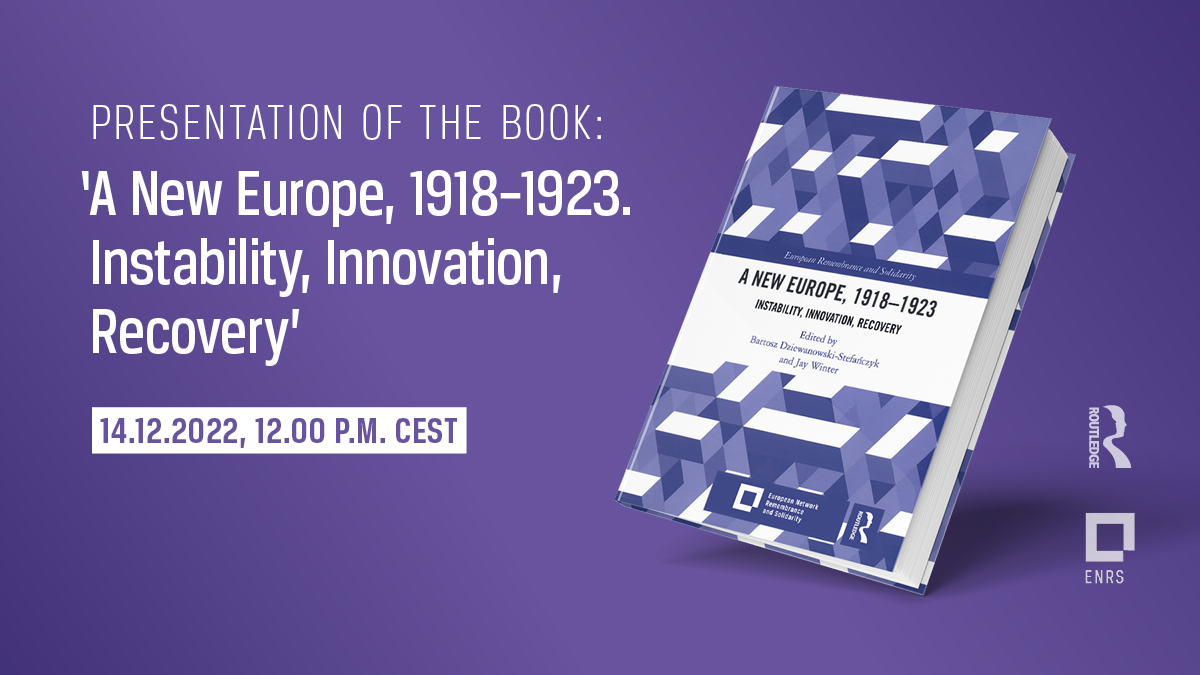 We would like to invite you to take part in an online discussion around the volume “A New Europe, 1918-1923. Instability, Innovation, Recovery”, edited by J. Winter and B. Dziewanowski-Stefańczyk and published within the ENRS and Routledge book series "European Remembrance and Solidarity". The seminar will be held on Zoom on 14 December at 12 PM CEST.

How was a New Europe formed after the Great War and did the order established at Versailles have a chance to endure and create a stable Central and Eastern European region? Was post-war diplomacy able to defend it? How is this intense period of transition remembered in the public space today? All these questions will serve us as a starting point for an online discussion around the volume “A New Europe, 1918-1923. Instability, Innovation, Recovery”, edited by J. Winter and B. Dziewanowski-Stefańczyk and published within the ENRS and Routledge book series "European Remembrance and Solidarity".

The seminar will be held on Zoom on 14 December at 12 PM CEST.


The main speakers are:

Jay Winter - Charles J. Stille Professor of History Emeritus at Yale University, Honorary Professor at the Australian National University and a specialist on World War I and its impact on the 20th century
Bartosz Dziewanowski-Stefańczyk - Deputy Head of the ENRS Academic Department, Research fellow at the History Institute of the Polish Academy of Sciences and specialist in the field of Polish foreign politics of memory and cultural diplomacy
Agnieszka Chmielewska - Deputy Director of Center for Europe, at the University of Warsaw, Member of the Group for European Socio-Cultural Processes Research and specialist in history and sociology of Polish culture of the 20th century

The discussion will be moderated by John Horne - Professor Emeritus of Modern European History at Trinity College Dublin (TCD), Member of the Royal Irish Academy, former Director and co-founder of the Centre for War Studies at Trinity College. Prof. Horne is a specialist in twentieth-century French and European history, and author of dozens of books and articles on the history of the labour movement, social history and on the comparative and transnational history of the Great War

More about the book "A New Europe, 1918-1923. Instability, Innovation, Recovery":
This set of essays introduces readers to new historical research on the creation of the new order in East-Central Europe in the period immediately following 1918.
The book offers insights into the political, diplomatic, military, economic and cultural conditions out of which the New Europe was born. Experts from various countries take into account three perspectives. They give equal attention to both the Western and Eastern fronts; they recognise that on 11 November 1918, the War ended only on the Western front and violence continued in multiple forms over the next five years; and they show how state-building after 1918 in Central and Eastern Europe was marked by a mixture of innovation and instability. Thus, the volume focuses on three kinds of narratives: those related to conflicts and violence, those related to the recasting of civil life in new structures and institutions, and those related to remembrance and representations of these years in the public sphere.
Taking a step towards writing a fully European history of the Great War and its aftermath, the volume offers an original approach to this decisive period in 20th-century European history.