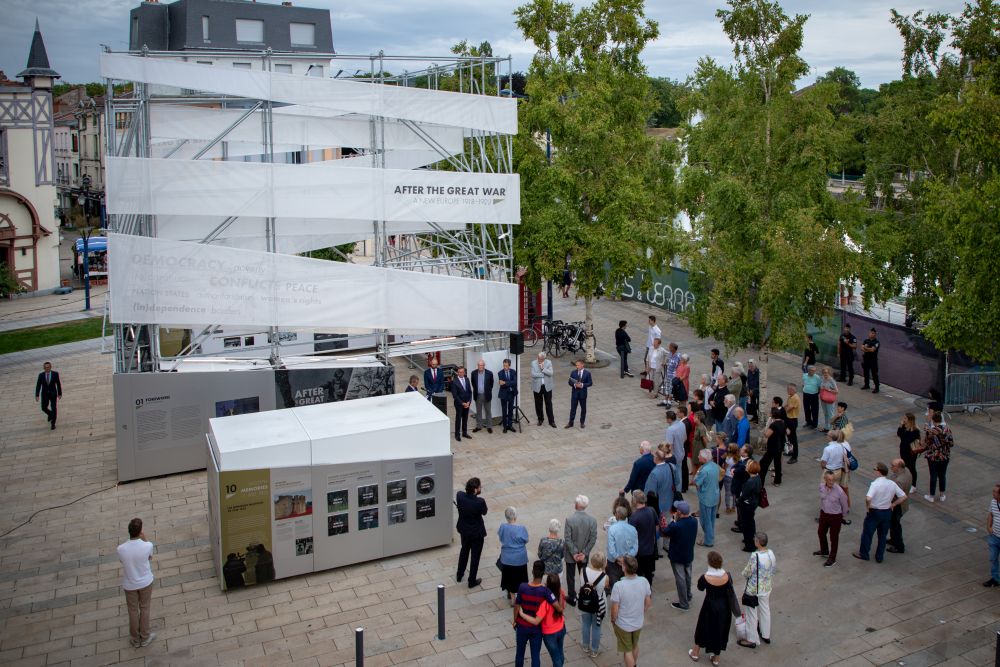 Exhibition „After the Great War” has opened in Verdun

The travelling outdoor exhibition is currently visiting the French town of Verdun where it will be staying until 25 September.

After having been shown in Prague, Sarajevo and Bratislava, the exhibition "After the Great War. New Europe 1918-1923" is now being presented in Verdun, France. It is the second, after Sarajevo, symbolically charged stop on the display's tour as it was exactly on the fields near Verdun that the longest and the bloodiest battle of the First World War took place.

The exhibition focuses on the turbulent period of the first five years after the Great War. It portrays the immense scale of political, cultural and social transformations, as well as highlights the differences in both the post-war experiences of various national communities, and resulting contemporary memories.

Among those who honored us with their presence during the opening ceremony were: the Mayor of Verdun Mr Samuel Hazard, the President of the Mémorial de Verdun and of the Meuse County Council Mr Claude Léonard, the Ambassador of the Slovak Republic in France, HE Mr Igor Slobodnik, the renowned historian from the University of Yale and a member of the exhibition Academic Council, Prof. Jay Winter and the Sub-Prefect of Verdun Mr Benoît Vidon.

In their speeches, the representatives of local authorities emphasized the importance of raising people's awareness of the lessons history might offer us. They also thanked for keeping the memory of Verdun alive - as a symbol and a warning against the senselessness of war, which remains a real threat till this day.

The ENRS representatives outlined the mission behind their initiative, as well as the general idea, meaning and main objectives of the “After the Great War” exhibition. The also described briefly the long and difficult process of joint work of more than 40 historians from different countries on the final shape of the exhibition’s narrative.

The Ambassador of the Slovak Republic in France HE Igor Slobodnik referred to the period, on which the exhibition is focused, mainly through the lens of Slovak memory. For Slovaks, who fought during the First World War on both sides of the barricade, those years remain marked by opposing feelings. On one hand, the Great War cost many Slovak lives, on the other – it created a unique opportunity to gain, together with Czechs, an independent country. Therefore, the Slovak Ambassador represented precisely one of those points of view the exhibition is supposed to make more audible.

In his spirited lecture, Prof. Jay Winter from Yale University, one of the world’s most renowned historians dealing with the First World War and its impact on the 20th century, as well as a member of the Academic Council of the exhibition, referred to the importance of attractive visual form in educating about history and explained how the exhibition was meant to combine and harmonize different means of engaging the viewer’s attention. He also stressed how crucial was sensitizing people to substantial differences of experience between the Eastern and Western Europe in this key historical moment right after the First World War, as memories stemming from that experience had never ceased to shape our contemporary consciousness. By evoking his personal experience as a survivor, from a family shattered by the Holocaust, he explained why the Eastern European experience and perspective had always been particularly important for him.

The display will be on view in Verdun till 25 September. Afterwards, it will travel to Berlin.