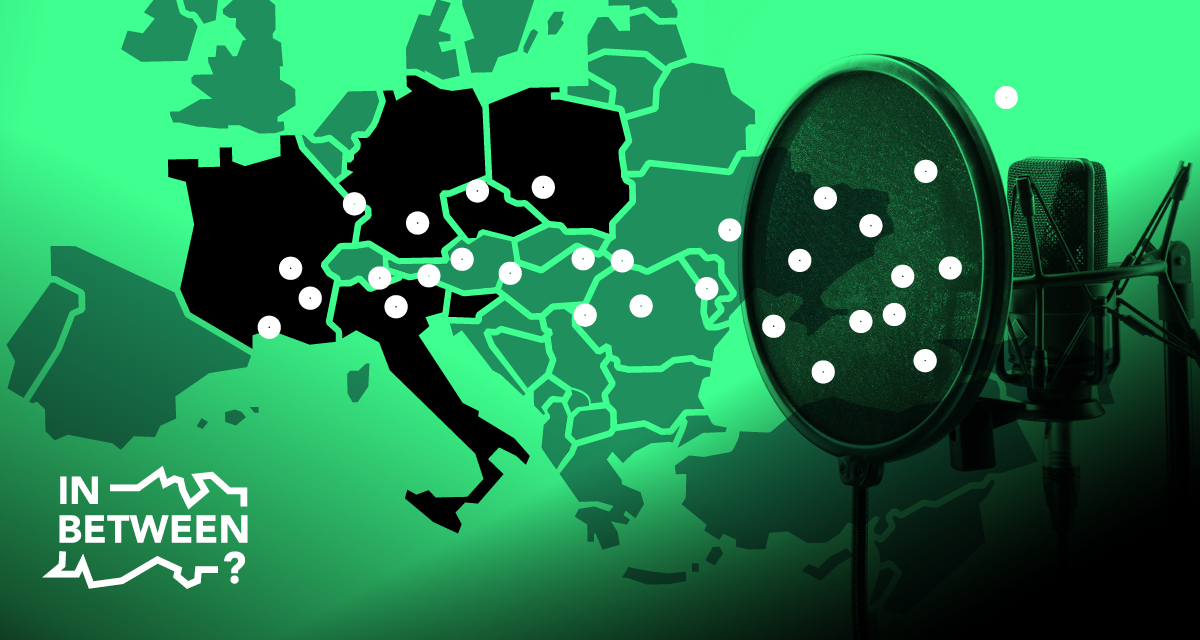 The participants of 'In Between?' bring us three podcasts produced during their study visits to the Polish-Czech, German-French and Italian-Slovenian borderland. Using their own research, excerpts of the interviews with time witnesses, local experts and activists, as well as sounds collected during their jouney, the groups created “sound postcards” that depict the history and the pulse of the borderlands they visited during the study visits from 9 to 16 July.

1. Polish-Czech borderland: 'Bridges Over the Olza'

The destination of the first group were the partner cities of Cieszyn and Český Těšín at the foot of the Beskid Mountains on the Polish-Czech border. Before the First World War, Poles, Czechs, Jews and Austrian Germans lived in Cieszyn, the capital of the region. The provisions of the Treaty of Versailles of 1919 began the process of regulating the borders of the Polish and Czechoslovak states diplomatically, militarily and politically. As a result, the city was divided by a border running along the River Olza. The podcast Bridges Over the Olza is a collage of humorous anecdotes, put against a broader background of the city’s past. It tells a story about smugglers and children playing games of crossing the borders, about the tensions in the beginning of the nineties, right after the fall of the Iron Curtain, and about emotions on the 1st of May, 2004, when Czechs and Poles celebrated the access to the European Union. Nowadays the inhabitants of the city cross freely the two bridges of the city, use both currencies – koruna and zloty, and communicate in similar languages without ruminating too much over the past.

2. German-French borderland:  'Everyone Has Their Own Alsace'

The members of the group going to Alsace were guests of the Albert Schweitzer International Youth Centre in Niederbronn-les-Bains, one of the sites run by the German War Graves Commission, which belongs to the official supporters of this year’s edition of “In Between?”. Niederbronn-les-Bains was the starting point for tours throughout the region and to Strasbourg. Nowadays, the capital of Alsace and the seat of the European Parliament is considered to be a symbol of a peaceful coexistence and of economic and cultural integration in a united Europe. However, the Alsatian people living here have been victims to the territorial and political claims of France and Germany in the past. The podcast Everyone Has Their Own Alsace gathers excerpts from the interviews and from the groups’ own conversations about identity. Parting from the question of what does it mean to be an Alsatian, the participants discuss theoretical concepts from the area of memory studies and they wonder if one’s own identity is something that has to be constructed, or rather lived individually, one day at a time.

The group travelling to the Friuli Venezia Giulia explored the twin cities of Gorizia and Nova Gorica. The local partner of the project in the Italian-Slovenian borderland was Kulturhaus Görz – a cultural centre dedicated to preserving the multilingual heritage of the city. The podcast “Sound of Division” produced during this journey, explores the story of fences that crossed the symbolical square of Piazza della Transalpina/Trg Evrope. The first one was constructed after the World War II, when the city was divided between Italy and Yugoslavia and, practically overnight, it became a border between two countries, two political orders, and two completely distinct languages. The second one divided the city from 1991 to 2004, when Slovenia became a member of the European Union. The third one appeared on the square during the corona pandemics, bringing to the surface old traumas of families, friends and lovers torn apart by a political decision taken by anonymous bureaucrats, hundreds miles away. However, there is also a voice of hope, because the twin cities work on a common project of becoming the European Capital of Culture in 2025. Will the sound of division become the sound of unity at last?

Read more about the 'In Between?' project