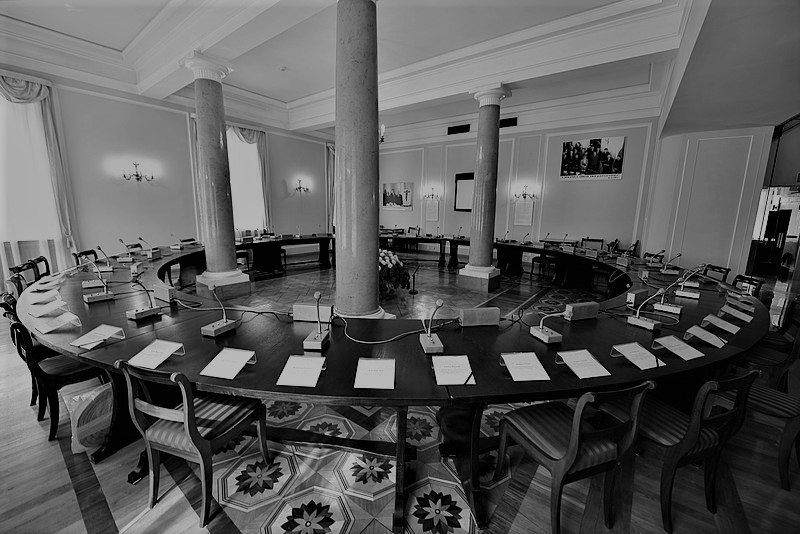 Original round table displayed at the Presidential Palace in Warsaw /photo by Adrian Grycuk.

Reshaping 1989: System Transformation of 1989 in Poland

Original round table displayed at the Presidential Palace in Warsaw /photo by Adrian Grycuk.

In the second half of the 1980s, the communists realised that a new formula was needed. They were preparing for a change allowing the opposition to share power, while trying to take control over national property. It was proposed in 1988 to hold a ‘round table’ creating conditions for negotiations between the communists and the opposition. The talks lasted from February to April 1989 yet moving towards democracy took another two years. The first free election was held on 27 October 1991.

In the latter half of the 1980s, an economic crisis hit the USSR, and consequently the Eastern Bloc countries. The authorities realised that the system would need to be reformed. In Polish society, uncertainty and lethargy dominated. Martial law may have been lifted but acts of violence perpetrated by the authorities were a daily staple.

After another wave of mass protests, it became clear that changes were taking place in the countries of the Eastern bloc, both in the economic system and in political life.

The power camp began to prepare for inserting the opposition into the government system, with as little damage to the elite in power as possible. It was mainly about their personal safety, security of their property and establishment of rules under which they would be able to remain in the highest circles of power. In August 1988 a meeting was held between Lech Wałęsa and Czesław Kiszczak. In return for extinguishing yet another strike wave, Kiszczak promised to orchestrate a ‘Round table,’ a negotiating space for both those in power and the opposition. The fact that Wałęsa agreed prompted astonishment and resistance among workers on strike, yet the strike leaders were eventually convinced that the talks had to start.