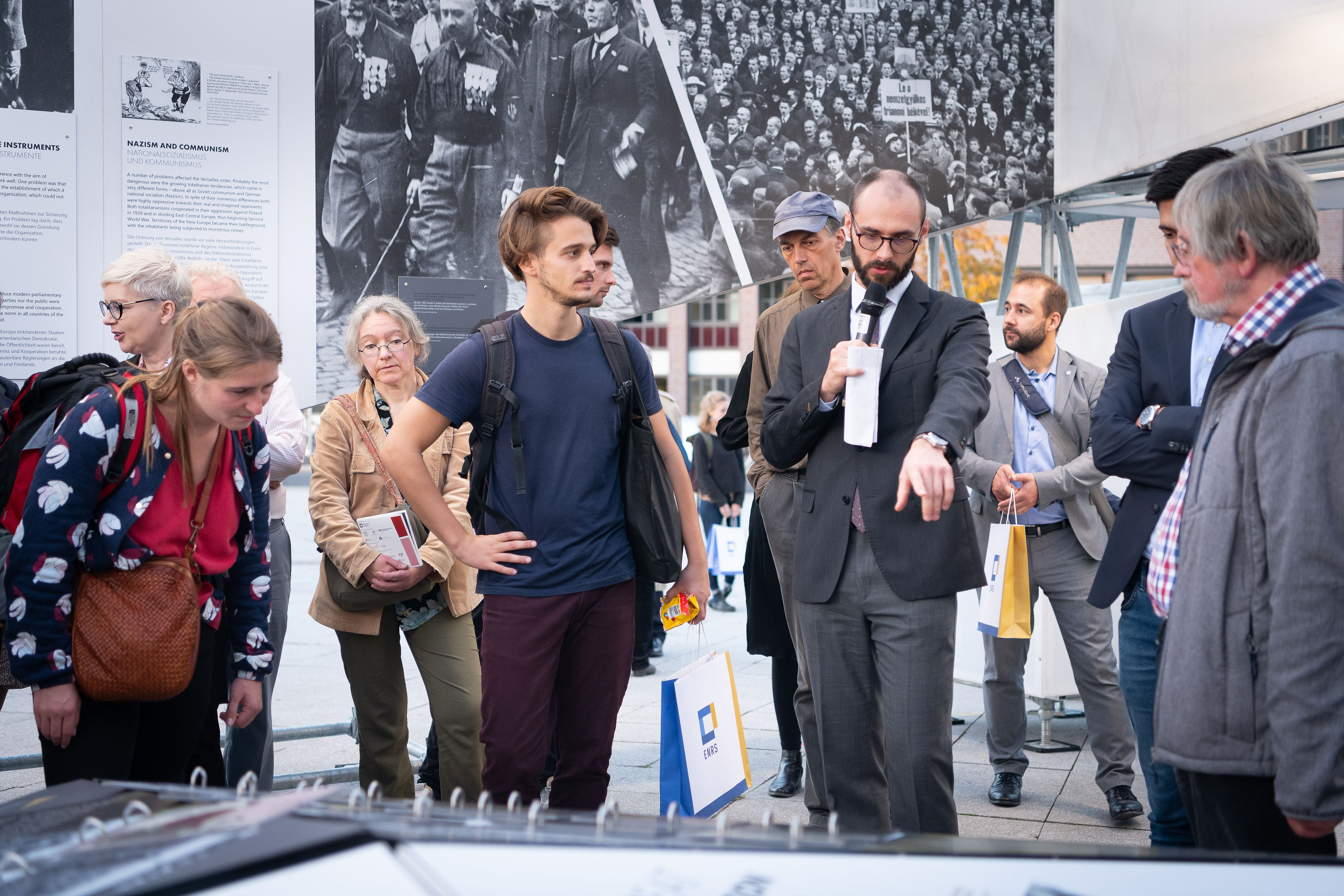 On 14 October, a special presentation of the "After the Great War" exhibition was held in Berlin. The open air display will remain in the German capital until 24 October. Afterwards it will continue with its tour by going to Weimar.

After Prague, Sarajevo, Bratislava and Verdun the exhibition is staying now in Berlin, the 5th city on its European tour.

The display, curated by Dr Bartosz Dziewanowski-Stefańczyk and Dr Robert Żurek, is the outcome of collaboration of over 40 experts from 18 countries. It illustrates the far-reaching political, social, economic and cultural developments between 1918 and 1923. In this period new countries appeared, many borders were redrawn, and societies were re-shaped or built. A so-called New Europe was established.

The guests that gathered for the special presentation were first welcomed by Prof. Matthias Weber, Chairman of the ENRS Steering Committee and Director of the Federal Institute for Culture and History of the Germans in Eastern Europe. In his speech, Prof. Weber pointed out the importance of balancing the historical perspectives of both Western and Eastern Europe by presenting together the events from all parts of the continent.

The next speaker was Mr Rafał Rogulski, the Director of the ENRS, who emphasized the role of the exhibition in developing a common European culture of remembrance. He described how its creators worked on reflecting the multifaceted sensitivities - such as national, regional, and also of a generational nature - and thus contributing to a better understanding between the citizens of Europe.

Prof. Arnold Suppan from the Institute for East European History, University of Vienna and member of the Academic Council of the exhibition gave the last speech. He stated that the exhibition managed not only to show the variety of perspectives but also attempted to convey the complexity of the period between the wars. "It is important to reflect on these [post-First World War] years, as it was then that the seeds of fascism and communism were planted and started to grow" - he said.

With these words in mind the guests were invited to a guided tour by the exhibitions co-curators: Dr Bartosz Dziewanowski-Stefańczyk and Dr Robert Żurek.

The special presentation was then followed by a discussion "1919 – 1939 – 1989. European Turning Points. A Century in Retrospect" held at the Catholic Academy in Berlin, with Prof. Dan Diner, Prof. Hans-Ulrich Thamer as well as Prof. Jan Rydel from ENRS Steering Committee.

The "After the Great War" display will stay in Berlin until 24 October. The last stop of its European tour this year will be Weimar where it will be presented from 1 till 19 November.