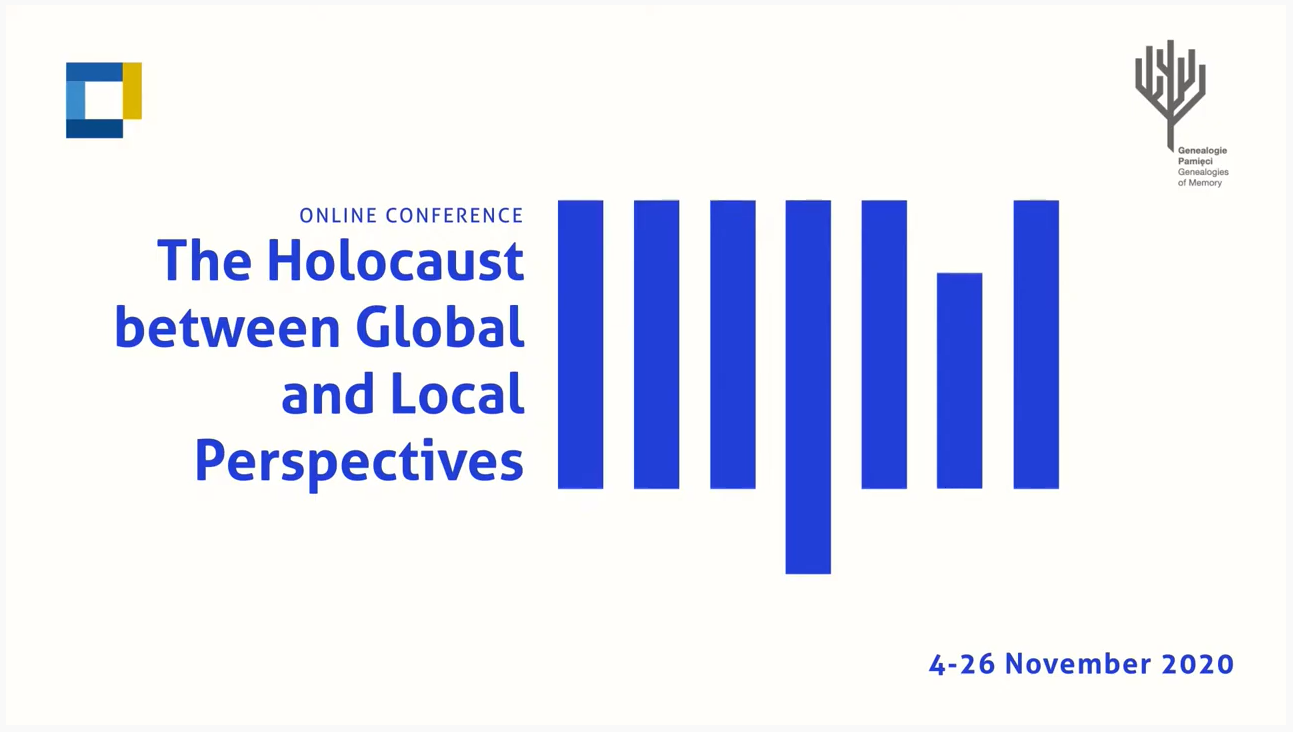 The Holocaust Between the Global and Local: Impressions on the 10th Genealogies of Memory Conference

2020 has been a particularly complicated year. Over the past twelve months, we have seen such catastrophes as the murder of George Floyd by the Atlanta police, the obliteration of natural landscapes due to uncontrollable wildfires, a widespread pandemic that continues to claim thousands of victims by the day, and a sharp rise in nationalist sentiments which have often resulted in violent dissent.

While every year is certainly marked by life-changing events, 2020 has delineated a distinct shift in our social, political, and cultural norms. These events ripple through us, compelling us to question our relationship to our known histories and perceptions of an uncertain future. In such turbulent times, how do we unite our historical understanding of the Holocaust within the context of our rapidly changing, increasingly globalized society?

The 10th Genealogies of Memory Conference poses this question, among others, to the academic community. As an annual project, Genealogies of Memory is committed to uniting scholars from around the world to discuss history and memory from both a European and global viewpoint. At this year’s conference, organized by the European Network Remembrance and Solidarity, The Holocaust Between Global and Local Perspectives introduces a diverse cast of presenters to speak on a range of subjects that covered Holocaust memory, commemoration, history, and education. With expert direction from project coordinator Gábor Danyi, this year’s program was facilitated and broadcast entirely online, demonstrating the new reality of academic discourse during the coronavirus pandemic. However, ironically, the online nature of the conference allowed for this global gathering to emerge as one of the most comprehensive discussions of contemporary Holocaust research available to date. The eight sessions took place over the month of November and generated more than 30 hours of unique content. With the entire conference available to watch on YouTube and Facebook, I had the privilege to review all eight sessions post-conference at my own pace. After examining each in depth, three key dimensions emerged from the symposium, which I will elaborate on below.

The first dimension that emerged in The Holocaust Between Global and Local Perspectives explored localized sites of memory, such as those found within national, city, or community borders. Peppered throughout the second and third sessions, presentations such as Éva Kovács’ “Forgetting by Remembering: On the Europeanisation of Local Memories of the Shoah,” Nadja Danglmaier and Daniel Wutti’s “Remembrance Culture in Border Regions – Towards an Inclusive, Cross-Border Memory,” and Omer Bartov’s “Genocide from Below: Rewriting the Holocaust as First-Person Local History,” discuss memory from a bottom-up perspective, focused on eyewitness accounts – or, in the case of Kovács’ presentation, the lack thereof. Incorporating a narrative framework into their discussions, these scholars explored the importance of regional politics, cultural norms, and national identity in our comprehension of Holocaust history.

In session four, we are introduced to the “overlooked local,” in which subjects like environmental histories, geographic space, and linguistic roots are discussed in relation to localized sites of memory. Mindaugas Kvietkauskas opens this debate with “Local Addresses in Holocaust Diaries: Reconstructing the Lifeworlds of Young Jewish Diarists in Vilnius.” In his presentation, he confronts the issue of conflicting narratives on the development of Lithuanian memory culture, including its effect on establishing correct placement of commemorative markers. Engaging with a similar topographic theme in session five, historian Ewa Domańska delves even deeper into the overlooked local. Discussing the ecological landscape of post-Holocaust spaces in her fascinating keynote entitled “The Environmental History of the Holocaust: Chances and Challenges,” she focuses on forensic interpretations of Holocaust memory. Domańska’s work provides a thorough consideration of a localized, natural memory, literally addressing the composition of the very soil upon which that history occurred.

Broadening the focus to incorporate a top-down perspective, the second dimension of the conference examined Holocaust memory from a comparative-global viewpoint. . Topics such as postcolonial studies, identity politics, interethnic violence, and transnational consciousness were all addressed, breaking from the trend of prior Holocaust research that has been confined largely within national borders. Subjects such as Jana Sayantani’s “Mass Violence and Silenced Memory: A Comparative Study of the November Pogrom of 1938 in Berlin and the Great Calcutta Killings in 1946,” examine connections between the Holocaust and other instances of genocide. Sayantini’s presentation is a noteworthy inclusion to session one, in which she compares Kristallnacht to the Great Calcutta Killings, and how these events are commemorated on both a national and global scale.

A globalized interpretation of the Holocaust was heavily emphasized in session seven, opening with Daniel Levy’s keynote entitled, “Mnemonics and its Discontents: Between Integration and Contestation.” In his presentation, Levy succinctly describes the modern decontextualization of the Holocaust in regard to other examples of atrocities and injustices, and the broader transition away from interpreting the event from the strict frame of the nation-state. However, he is careful to acknowledge that this does not mean that national or local levels should be entirely discounted, but rather, that they should be incorporated within the framework of Holocaust remembrance in a reflexive manner.

Lastly, the final dimension addressed in the program was the inclusion of digital forms of remembrance. Not surprisingly, this speaks to a larger trend of how information is increasingly conveyed through new technologies, such as social media applications, interactive media, and other such outlets. Presentations on interactive survivor holograms, internet-based photo archives, selfies at Holocaust memorials, and social media portraits of victims provided a compelling look at a growing element in the field of Holocaust research. This topic was perhaps most thoroughly examined by anthropologist Jackie Feldman’s presentation in session six, “The Vanishing Body of the Witness: Transmission of the Shoah in a Digital Generation.” Noting that our future understanding of Holocaust history will be predicated on the fact that we are now shifting to a fully digital stage of remembrance, Feldman tackles a modern example of witnessing, and what it means for a young person to take selfies at Holocaust memorials.

Raising even more questions about what it means to be a witness in a digital generation, in her presentation “Eva.Stories: A New Dimension of Holocaust Memory on Instagram: Between the Universal and the Local,” cultural studies scholar Liat Steir-Livny discusses a popular Instagram project entitled Eva.Stories, and its role in successfully communicating Holocaust memory to global audiences. My own presentation, which was co-authored with Diane L. Wolf, also confronts the act of witnessing in a highly mediated world. In “Accessing Trauma on Demand: The Holographic Holocaust Survivor and Digital Bodies of Violence,” we analyze the use of survivor holograms and the tendency for audiences to utilize digital testimony as trauma generators, leaving room for the possibility that these tools can potentially be used to inspire acts of mobilization and social justice.

Regrettably, I cannot fit the analysis of every presentation into this short article, but I wish to acknowledge that the act of uniting a group of several scholars across various continents to a single location via webinar technology was an exceptional feat. The successful digital consolidation of the presenters, ranging in location from Europe to the United States, to South Korea, produced a perfect representation of the conference theme as a whole: it was truly an experience between the global and the local. In the final session of the program, moderator Małgorzata Pakier noted that the intent of the conference was not just to act as a vehicle to discuss modern conditions of Holocaust memory, but to contextualize it within the framework of what Astrid Erll refers to as the third wave of memory studies. Embarking into this new territory – whether it be the digital, global, or otherwise - we must complicate what the Holocaust will mean, both to this generation and generations to come. Facing an undetermined future, we will continue to renegotiate our relationship to history, commemoration, and remembrance.