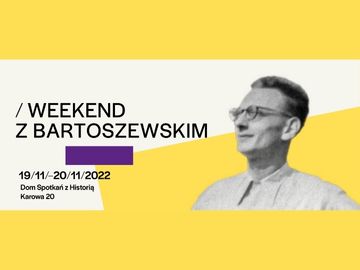 On 19th and 20th November History Meeting House in Warsaw organises a series of events dedidated to Professor Władysław Bartoszewski.

Righteous Among the Nations, journalist, writer, historian, social activist, Polish senator and secretary of state. The life of Władysław Bartoszewski is a model of patriotism, courage and civic commitment. We know a lot about this outstanding man, but do we know everything?
During 'Weekend with Bartoszewski' at History Meeting House in Warsaw friends and colleagues will share their memories of the Professor. Unknown stories and anecdotes will bring his extraordinary personality closer to the audience, which will have a chance to take a look at many slightly overshadowed - yet important and inspiring - chapters and episodes from Bartoszewski's biography. The meeting will be attended by Rafał Rogulski, the Director of ENRS.