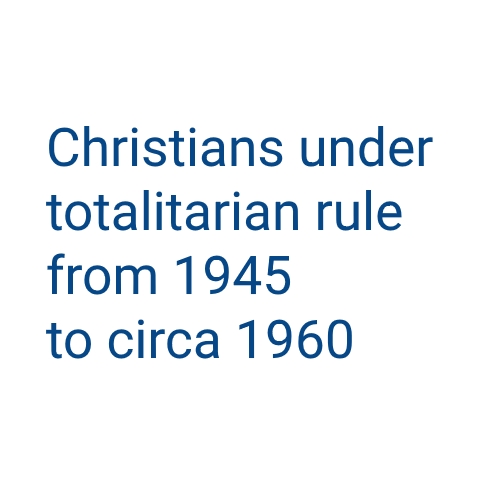 About Christians under totalitarian rule from 1945 to circa 1960

ENRS had the honor to be a co-organiser of the conference on "Christen unter totalitärer Herrschaft von 1945 bis ca. 1960 in der SBZ/DDR, Polen, der Ukraine und der ČSSR" (English: Christians under totalitarian rule from 1945 to circa 1960 – Soviet Occupation Zone/GDR, Poland, Czechoslovakia, Ukraine).

Program of the conference

The European Network Remembrance and Solidarity and its mission – Matthias Weber, Oldenburg

Thematic focus: Soviet Occupation Zone/GDR
Christians between the fronts. The Youth dedication ceremony as an expression of the conflict between Church and State in GDR – Thomas Arnold, Dresden
Bishop Julius Döpfner in the eyes of the State Security – Jörg Seiler, Erfurt
Soviet Occupation Zone/GDR: A minor headwind in the storm of Socialism. On the life of Christians in the GDR and their opportunities for worship – Josef Pilvousek, Erfurt

Meeting of scholarship holders: Introduction and discussion of current projects from Cardinal Bertram Scholarship holders
The Ackermann Community and Bohemia: the ‘Persecuted Church’ initiative in the 1960s and 1970s – lecture from Franz Kubin (Director of Studies, retired), Bamberg
Conversations with contemporary witnesses
History, functions and objectives of the Ukrainian Orthodox Church in Bamberg. Conversation with the Rev. Bogdan Puszkar, Bamberg