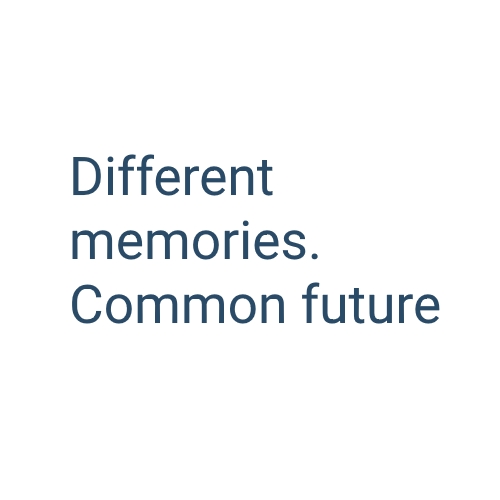 On the occasion of Europe Day 2019 on May 9, the Delegation of the European Union in Rome in cooperation with ENRS organises a debate: "Different memories. Common future".

History is written to propose an educated picture of past events and processes, with their actors and deliberations, and the consequences of their acts. It may shape (through explaining, teaching, debates and confrontations of opinions) a general vision of processes governing the relation between states or between power and society, or rules of how societies and ideas develop. Contrary to history, memory is based on individual experiences. It does not pretend to explain big processes. However, memory through its personalized character, its ancestral and often mythical roots, does capture emotions and has more power to seize collective emotional perception of the past than savant considerations of history.

• Could any advice be formulated for educating citizens for Europe?

• Are the lessons from the period after the Great War well understood in the current European debate?

• Is Christian teaching still constitutive and relevant for Europe?

For its very complexity and interconnectedness, European narrative contains unlimited number of streams. The debate about which one is right singles Europe out from all regions of the world. Identities are built out of diversity. They exploit past differences and adversities. The miracle of the European Integration for the past seventy years has, to some extent, diverted attention from past confrontations to the future challenges. However, future perspectives cannot and must not eliminate passionate identity debate on all levels, from family and small community, to nation or even larger. The more supranational and global processes interfere in the peoples everyday life, the stronger is the temptation to escape into the identity debate in search for temporary comfort and illusion of being better protected.

• Are memories of all nations of equal value for common European conscious?

• Is there any possibility to avoid the divisive account of past wounds and sufferings for the sake of the political debate in national context?

• Is national, regional or community identity contrary to the sense of belonging to the European civilization?

Bridging between the natural human desire for identity and emotional comfort with the world ever more intrusive interconnectivity of processes, constitutes an enormous challenge for politicians and public actors, as well as for all the members of the society. The vast achievements of the European peace and prosperity, accomplished thanks to the progressive integration of more and more parts of Europe, must not be compromised by fighting past wars and jeopardizing the fate of future generations. The historical narratives should form multi-perspective knowledge of European roots and avoid the sentiment of being excluded from the mental and cultural heritage. Reconciling various perspectives could help to prevent future disputes and tragedies. Moral reflection about the meaning of reconciliation, based on Christian teaching, gives incentives and guidance for political and societal actors.

• Do various European politics and institutions allow for a genuine debate about what does Europe mean for citizens?

• Does the European past risk capturing people’s emotions more than the perspective of peaceful future cohabitation?

• Should moral reflection be more paramount in public debate or is administrative approach to solving problems sufficient to keep European Union together?

• What role to be played in European debate about the past by Churches?