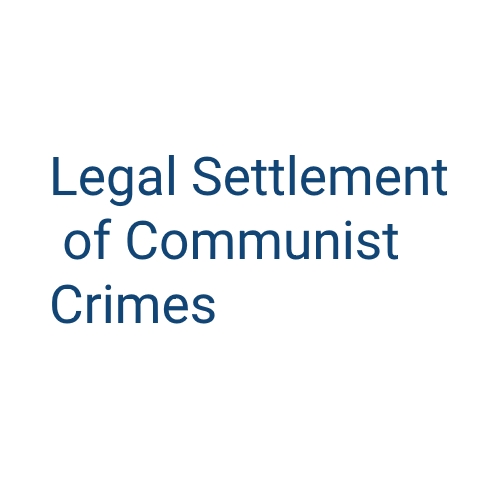 The „Legal settlement of Communist Crimes” conference took place on 5 June 2012 at the European Parliament, Brussels. It was called in response to growing calls for strengthened international justice for the perpetrators of communist crimes. The aim of the conference was to support equal rights for all EU citizens and to aid the process of reconciliation and integration in Europe.

The conference brought together key thinkers and experts, together with European policy makers and representatives of victims. Together they discussed possible models of international justice that could finally settle the ethical, moral and legal debt with regard to EU citizens who suffered severe violations of human rights under totalitarian communist rule, as well as to the to the perpetrators of the crimes.

Among the speakers were: Dr Ján Čarnogurský, former Prime Minister of Republic of Slovakia, Chairman of ENRS Advisory Board and Prof. Jan Rydel, Chair of the Steering Committee of ENRS. The conference was prepared under the auspices of Dr Hans-Gert Pöttering and Prof. Jerzy Buzek – former presidents of the European Parliament, who gave the closing speech.

Among those present were representatives of the 17 associations of victims of communist crimes from different EU member states, who asked EU authorities to finally resolve the issue of justice for those responsible for communist crimes in their “Declaration 2012”. Other documents calling for the legal settlement of the atrocities of 20th century are: the Prague Declaration on European Conscience and Communism of 3 June, 2008; the European Parliament resolution on European Conscience and Totalitarianism of 2 April, 2009; the Declaration on Crimes of Communism of 26 February, 2010; the European Council's Stockholm programme of 4 May, 2010 and the Warsaw Declaration of the Justice and Home Affairs Council of the EU on the occasion of the European Day of Remembrance for Victims of Totalitarian Regimes of 23 August, 2011.